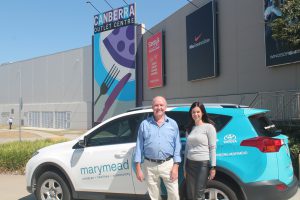 MARYMEAD has begun its 50th year by receiving almost an entire shop-full of baby items donated by the Canberra Outlet Centre for distribution to families in need.

The donation is just one example of the support the centre has provided to Marymead.

Marymead serves the ACT and southern and western regions of NSW with offices in Canberra, Goulburn, Moruya, Wagga Wagga and Young.

It provides support to more than 5000 children, young people and their families each year.

“To say I am overwhelmed by the magnitude of this donation would indeed be an understatement”, Marymead CEO Camilla Rowland said.

“Literally hundreds, if not thousands of families will be impacted by this donation, one of the largest Marymead has received in its 50-year history.”

Collection of the donation was helped by Rumbles Removals & Storage Queanbeyan, who provided the truck and manpower.