AFTER almost half a century of community service in Canberra, Marymead is embarking on a bold campaign to strengthen and improve its existing services, as well as establishing several new ones.

The organisation launched its strategic plan for 2016-2020 on March 7 in Canberra, titled ‘A fundamental option for vulnerable children, young people and their families’.

“We are on a mission to transform the lives of vulnerable children and young people in our region,” Marymead CEO Camilla Rowland said at the launch.

The organisation undertook “rigorous strategic consultation and planning” over five months, to determine its future priorities. 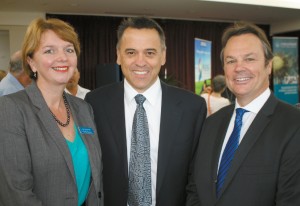 Marymead CEO Camilla Rowland with ACT Minister for Disability Chris Bourke, middle, and Marymead’s board chair Robert Kennedy
at the launch of the organisation’s 2016-2020 strategic plan on March 7. PHOTO: SUPPLIED

“This work also confirmed that there are growing significant gaps for families at risk in the region and we will work to develop services to address these,” Ms Rowland said.

A range of services will be expanded, including family counselling, after school care, foster care in NSW and supported contact services to assist those affected by separation.

“Our broader goals are to become a leader in the development and provision of evidence-based, outcome-oriented services to support children and young people and we will retain our strong connection with the Canberra community,” Ms Rowland said.

“Our strategic plan may be for four years but our mission is setting the way ahead for our next 50 years.”

That mission, according to the strategic plan, will be achieved “by working in a way that is consistent with Catholic social teachings, beliefs and customs and the professional expectations of the social services community”.

“Marymead has been supporting Canberra and the surrounding communities since 1967 and rarely in that time will the landscape for community organisations have been changing so dramatically, thanks in large part to the effects of the National Disability Insurance Scheme,” Dr Bourke said.

“Against this backdrop, it is imperative for community organisations to have a clear picture of where they are heading and how they plan to get there. This is what the Marymead strategic plan delivers.

“I congratulate Marymead on producing this strategic plan and look forward to seeing it deliver for our community.”

In February, it was announced that Marymead will manage Ricky Stuart House, a purpose built respite centre in Chifley for children with disability.