Matt gets kick out of African trek 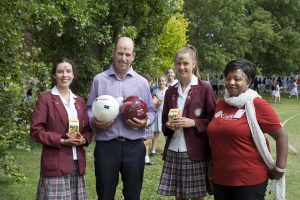 ONE imagines that 2300km across Africa is difficult enough without trying to do it while kicking a soccer ball at the same time and budgeting on $1.50 a day.

That’s what Caritas Australia’s 2017 Project Compassion Ambassador Matt Napier did midway through last year in a bid to raise awareness of global property.

The Canberran lost 8kg over 11 days and 15kg over a couple of months but says “it was well worth it”.

Embracing this year’s theme of ‘Love your neighbour”, he shared his experiences from his walk in Africa.

Speaking at St Clare’s College Griffith to more than 1000 students from Archdiocesan schools at the 2017 launch of Project Compassion, Mr Napier said he was struck by the conditions in which some people live.

“Last year when I was in Mozambique, I witnessed a single mother and three of her four kids living in a two metre by two metre shanty on $7 a month,” he said.

“One of her sons would sleep under a tarpaulin attached to the shanty and when it rains his area would get flooded giving him nowhere to go.

“While these people are living in these conditions, none of us can truly rest and as Catholics we need to be setting an example.”

Mr Napier also spoke about his passion to end poverty, promote justice and uphold the dignity of poor people.

He said the World Bank estimates 90 million people live in extreme poverty in Australia’s neighbouring region and that another 300 million are vulnerable to falling back into poverty due to natural disasters, climate change, disease and economic shocks.

By supporting Caritas, the international humanitarian relief and development agency of the Catholic Church, much-needed aid is provided in more 29 countries.

“I think as human beings, it shouldn’t matter where we’re born or what colour our skin is or what religion we follow, we should all be given the basics in life, which include food, water, shelter, healthcare and education,” he said.

“For my wife and me, giving back makes you feel much better on the inside.

“We donate 50 per cent of our income from our business and since we’ve decided to do that we’ve never felt better.

“By supporting Project Compassion you are supporting Caritas’ role in empowering our neighbours across the world to build a brighter future.”

Running throughout the six weeks of Lent leading up to Easter Sunday (April 16), Project Compassion is again serving as Caritas Australia’s major fundraiser for the year.

Canberra-based director for Caritas Lulu Mitshabu says over the years that Project Compassion has transformed millions of lives globally.

“In the last year alone, thanks to our generous supporters, we reached over two million people directly through our emergency and development programs,” she said.

“We again have high hopes for what we can achieve this year.

“Mary MacKillop College Canberra has pledged to try and raise $20,000 in the six weeks before Easter Sunday.”

Mrs Mitshabu said during Lent students, parishes and community groups across the Archdiocese are invited to support Project Compassion by making a donation, or by hosting fundraising events, while supporters can also to share their stories on social media at #ProjectCompassion for awareness-raising.

At the launch, Archbishop Christopher Prowse was principal celebrant at the Mass which signalled the beginning of the Lenten season.

In his homily, he asked those gathered to focus on fasting, prayer and almsgiving for the global poor during Lent.

“It’s called conversion to holiness and that’s what God wants, spending time with Jesus in prayer everyday,” he said.

He asked the gathering to be mindful of all that influences the heart, the mind and the tongue.

To find out more about Project Compassion call 1800 024 413 and for more information go to the Caritas website at www.caritas.org.au