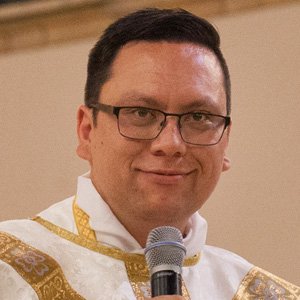 “Before I formed you in the womb I knew you; before you came to birth I consecrated you.” (Jeremiah 1:4-9)

A CONVERT to Catholicism is the newest priest of the Archdiocese following his ordination and subsequent ‘ontological change’ at St Christopher’s Cathedral Manuka on October 13.

Described as a strong networker of people, Fr Joshua Scott, a former agnostic from Young NSW, was ordained by Archbishop Christopher Prowse on the 100th anniversary of the sixth and final Marian apparition at Fatima.

The newly ordained priest’s trademark smile was largely on display at the end of the ceremony, with seven years of formation coming to fruition.

When speaking to the congregation, Fr Scott thanked God, Mary the Mother of God, the Saints, clergy and other members of the Archdiocese, his family and friends as well as the various communities for walking alongside of him on his journey.

A key moment at the ordination was when his mother Louise Scott and his grandfather Murray Scott brought up his stole and chasuble to the sanctuary. He was then vested by Fr Dermid McDermott and Fr Ed Travers MSC.

Fr Scott paid tribute to all those charged with his training and asked his brother priests of the Archdiocese to teach him and to be patient with him.

After the ceremony a supper put on by the Canberra Couples for Christ (CFC) community and by other members of the Filipino community was held in the Haydon Hall of St Christopher’s Pastoral Centre.

They were representing just one of the many communities which the ordinand has been involved with during his formation years.

Archbishop Prowse in his homily spoke of the call of the Holy Spirit and about the newly ordained priest’s journey to priesthood which he said was “fuelled by an inner yearning”.

“This journey has not been walking in a bed of roses!” the Archbishop exclaimed.

“Quite the opposite: for Josh, there has been some very deep times of personal anguish and some marvellous times of Godly consolation.

“Joshua’s primal question in his early years has been the existential question – if you exist God, help me!”

The Archbishop highlighted example of the new priest’s sacrificial love to lay down his life for his friends in the Church (John) and asked him in a pluralistic society to be more of a fisherman than a shepherd.

He also asked that the ordinand allow himself to be led by the laity in his ministry exercising co-responsibility with all Baptised Catholics.

And he recalled some conversations which he has had with Fr Scott over the past few years.

“Joshua talks about his journey to the priesthood as a journey of love,” the Archbishop said.

“He talks about a journey that has lead him from disbelief to belief, from darkness to light, from being lukewarm to a life emblazoned with the love of Christ.”

To read the Archbishop’s homily in full go to https://cgcatholic.org.au/about/our-archbishop/homilies/homily-october-2017-2/

Fr Scott is now the youngest priest of the Archdiocese and the most recent to be ordained since Fr Trenton van Reesch became a priest in 2015. His ordination comes after seven years of formation at the Seminary of The Good Shepherd in Homebush between 2010 and 2016.

He was subsequently ordained a deacon last year at St Mary’s in Young on October 22 – the Feast of St Pope John Paul II and has served the Goulburn Mission since January this year.

He celebrated Masses of Thanksgiving at Holy Family Gowrie on October 14, St Mary’s Young on October 15 and will celebrate another one at Sacred Heart Pearce on October 29.

He was recently appointed as an assistant priest in the Central Canberra Parish to minister alongside parish priest Fr Bernie Patterson.

The parish incorporates the communities of St Brigid’s Dickson and St Patrick’s Braddon.

Fr Scott’s journey to the priesthood

– If you or someone that you know is interested in discerning being a priest in the Archdiocese please email vocations director Fr Paul Nulley – paul.nulley@cg.org.au