New energy of the elect 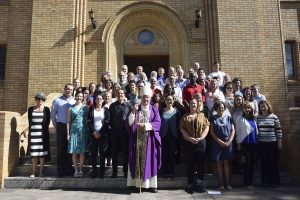 EMULATING the Catechumenates in the early life of the Church, about 50 people gathered in the crypt of St Christopher’s Cathedral with Archbishop Christopher Prowse.

They were beginning the journey to Easter by participating in the Rite of Christian Initiation of Adults (RCIA) Rite of Election and Enrolment.

Archbishop Prowse met each candidate individually, learning of their stories and praying with them.

Deacon Ransom said it was an uplifting gathering where the fresh energy of the elect was evident.

Included in the elect were those who have been baptised in the Catholic Church or in other denominations, but are seeking to come to a more full participation in the life of the Church by receiving the other sacraments of initiation including Holy Communion and Confirmation.