New head for our Catholic schools

Catholic Education in the Archdiocese enters a new era with the appointment of director Ross Fox.

Mr Fox comes to Canberra after being employed for the past three years as director of the National Catholic Education Commission based in Sydney. 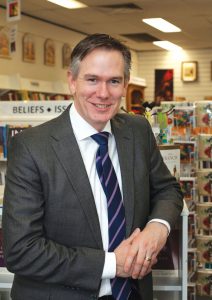 Archbishop Christopher Prowse said Mr Fox would be “a worthy successor to the great contribution in this vital area given by Ms Moira Najdecki.

“I take this opportunity to congratulate Ross on being appointed to such a significant role in the Archdiocese of Canberra and Goulburn; and for Catholic education in the ACT and NSW.”

Archbishop Prowse expressed his confidence in the selection of Mr Fox from a strong field of applicants.

“I am confident that Ross will bring to the role a deep faith, understanding and commitment to the mission of the Archdiocese, and will assist me in my pastoral responsibilities,” Archbishop Prowse said.

“Ross is profoundly committed to Catholic education, as evidenced by his work as executive director with the National Catholic Education Commission, having been appointed to the role in July 2013.”

Mr Fox says what attracted him to the role was Canberra itself and the community aspect that it exhibits.

“Canberra and surrounds is recognised across Australia as a great place to live,” he said.

“The Archdiocese across both ACT and NSW is known for its great communities with distinctive identities and it has a great education system with dedicated leaders and teachers.”

He also read philosophy, politics and economics at Oxford University and spent time studying there alongside the Dominicans who were significant in his personal faith development.

Stepping into the director’s role, Mr Fox brings with him experience at national level and plenty of enthusiasm.

“I have worked at a national level in Catholic education with particular strengths in development of school education policy and particularly funding policy,” he said.

“I am passionate about the potential for education to provide opportunities for young people to realise their dreams.”

Mr Fox said he was looking forward to working closely with school communities in bringing about the best possible outcomes.

“I look forward to listening to everyone involved in Catholic education in the Archdiocese to build on the great strengths of our Catholic schools and the communities that support them,” he said.

When discussing the challenges which currently face those in Catholic education, Mr Fox said contexts of schools and the needs of children could vary significantly.

“What should not change is the focus of all that we do in Catholic education must be to nurture the needs of the whole child, with great teaching and learning for every student in the school and within the community,” he said.

An active participant in parish life, Mr Fox is married to Joanne. He will take up duties as director next month.