AFTER almost a decade of work revising a resource more than 30 years old, a comprehensive new worship resource for the Catholic Church in Australia, Catholic Worship Book II, will be launched this Lent.

CWBII is a project of the National Liturgical Music Board, which is the consultative body on liturgical music to the Australian Catholic Bishops Conference.

It is the first monumental work of its kind in Australia to have been compiled by a group of musicians and consultants under the auspices of the Church, rather than a commercial publishing enterprise, for specific use in the Church.

The book encourages the vision of the Second Vatican Council that reaffirms music as an integral part of all liturgical rites and, therefore, proper worship of God

It is a response to the 2001 Vatican document, Liturgiam Authenticam, which called for a more faithful translation of texts and clear guidelines for the establishment of sacred music repertoires within dioceses and local parishes. 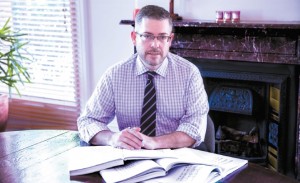 Bernard Kirkpatrick has played a key role in the creation of a new liturgical resource for the Church. PHOTO: ELIZABETH MCFARLANE

CWBII consists of more than 650 musical items, explanatory notes on principles for choosing and using liturgical music, and rubrical instructions.

It includes hymns, chants and other liturgical music from a variety of Australian and overseas composers, past and present. Taizé chants are well represented among plainchants along with more contemporary styles of music.

It contains not only music for Mass but also music for the Sacraments, with a comprehensive section for the stages of the RCIA (Rite of Christian Initiation of Adults) and the Divine Office.

Each piece of music has been meticulously chosen; the essential selection criteria being: musical quality, text quality and pastoral considerations.

The director of music at St Patrick’s Cathedral in Parramatta Bernard Kirkpatrick, was a key contributor to the creation of CWBII.

Mr Kirkpatrick hopes the book will be the beginning of a larger project to educate and strengthen Church music in Australia and beyond.

“The book itself is one aspect of the CWBII project,” he said.

“It was felt that we needed to go down the track of first producing a hard copy resource, to be followed by a digital download facility, especially for the melody edition, for those places where data projection is used or special order of service booklets are required.

“After the book is released, we will have workshops and forums where the content of the book can be explored and demonstrated.”

A longer-term project of the resource is to record and provide pre-recorded accompaniments of selected items, for those communities where musicians are scarce or unavailable.

*This article was originally published in Catholic Outlook and is used with permission.