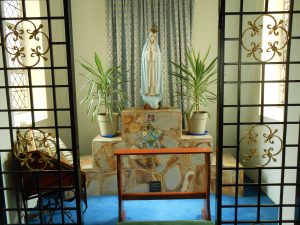 GOULBURN Catholic parish will commemorate the 100th anniversary of the Fatima apparitions by holding the ‘Five First Saturdays’ devotion beginning on May 13 and ending on September 2.

Along with the small church at Bigga, North Goulburn is one of only two churches in the Archdiocese bearing the patronage of Our Lady of Fatima.

Members of the St Vincent de Paul Conference in Goulburn are organising the celebrations, and hope to attract people to join the society in Goulburn.

“It is hoped that many people will take the opportunity to be part of the Five First Saturdays devotion,” SVDP secretary and co-organiser Wendy Wise said.

To commemorate the centenary of Our Lady’s appearance to the children at Fatima in Portugal, the Five First Saturdays devotion consists of four parts which involve a guest speaker, Holy Communion, Confession, Rosary and meditation.

Fr Leo Coffey CSsR will be guest speaker on May 13 on the relevance of the message of Fatima today.

On June 3, Fr Laurie Bent will speak about the Rosary as a meditation rather than a repetition of Aves. On July 1, Fr Hugh Thomas will provide an insight into the mind and heart of Pope Francis, his extraordinary devotion to the Mother of God, and how he is shaping the Church.

Fr Coffey will return on August 5 to talk on the role of Our Lady in the Church today.

Sr Noelene Quinane will give the final presentation on September 2, discussing the role of women in the Church.

St Joseph’s Primary School, which is next to the North Goulburn church, has a special devotion organised with a statue of Our Lady of Fatima to be displayed in a different classroom each week, where prayers will be offered.

“One of the sports houses at St Joseph’s is called Fatima, so the centenary of the events of 1917 has a special significance to them,” Mrs Wise said.

For more information about the Five First Saturdays devotion at North Goulburn, contact Wendy Wise on (02) 4821 7492.