Now even Vatican is seeing green

CANBERRA Raiders chaplain Mgr John Woods took a piece of the Green Machine to the Vatican while attending the inaugural Sport for Humanity conference.

The conference was the first global conference on faith and sport, hosting representatives from across the world to further affirm the power of sport for human good. 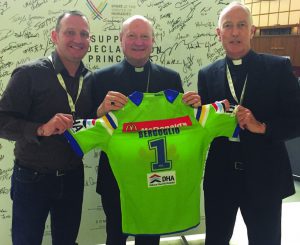 He did manage to present the special Raiders jersey to Cardinal Rasavi, head of the Pontifical Council for Culture who, with Pope Francis, was responsible for the conference.

The jersey was custom printed with the word “Bergoglio”, Pope Francis’ surname, on the back. Mgr Woods said Cardinal Rasavi appreciated the presentation and said he would pass on the jersey to Pope Francis.

“Cardinal Rasavi had a big smile on his face when he saw the name ‘Bergoglio’ on the back of the jersey and it was wonderful to be able to show my support for the Raiders at this huge sporting conference,” Mgr Woods said.

“The conference had some sporting stars from across the globe including rugby union legends Sean Fitzpatrick and Hugo Porta, former All Blacks and Argentine Pumas captains, and in fact Sean Fitzpatrick was telling me that Mal Meninga was a hero of his.

“I was also able to spend time with Australian Ambassador to the Holy See, Melissa Hitchman. She asked me to speak after the conference at a gathering of ambassadors.”

Sourced with permission from http://www.raiders.com.au/news/2016/10/10/raiders_make_it_all_.html