Fatima significance not lost on Joshua 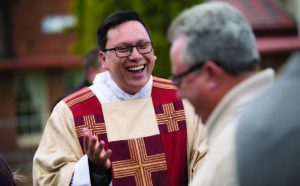 JOSHUA Scott has a strong devotion to Our Lady, so being ordained a priest this month a century after the apparitions at Fatima makes it an even more a special occasion.

His ordination in St Christopher’s Cathedral at 6pm on October 13 is exactly 100 years after the sixth and final apparition in Portugal.

“As soon as I learned that I would be ordained on the centenary of Fatima, I was deeply moved that once more Our Lady will be with me on another significant step of my vocational journey,” he said.

“Having received baptised, confirmed and receiving my first Holy Communion and first Reconciliation in my hometown Parish of St Mary’s Young, I have always had a special place for Our Lady.” Last year Deacon Scott was ordained a deacon on the Feast of St Pope John Paul II.

The priest-in-waiting is well acquainted with many Archdiocesan communities after pastoral stints at Page, Queanbeyan, Temora and Young, as well as Caringbah (Sydney), He is now serving in the Goulburn Mission and is looking forward to seeing many familiar faces at his upcoming ordination.