Pilgrimage seen as a ‘miniature of life’

Pilgrimage can be seen as a miniature of life and symbolic of our faith journey, Guinness and God devotees were told.

Dominican Sister Mary Rachel Capets drew on her personal experience of pilgrimage, which began at Jubilee 2000.

“There is often a peace about the place of pilgrimage. We know this to be grace. The grace of a life lived and spent for God,” she said. 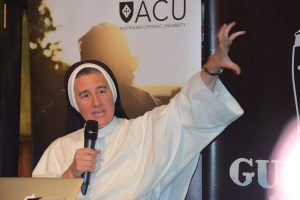 There were many reasons for undertaking pilgrimage. For Christians, it involved finding a “place of refuge”, getting out of “comfort zones” to leave themselves “vulnerable enough to have a dependence upon God”.

For her, the main reason for pilgrimage was to “escape the busy-ness of life” and to “find some time for reflecting”.

Sr Capets identified a three-fold structure for undertaking pilgrimage. The first was “leaving home and all that is familiar to us,” while the second was the destination.

The third phase was where the pilgrim returned to everyday life, with a “new resolve and a new perspective”.

Pilgrimage had a long-standing tradition with each major world religion.

She named the three most popular Christian pilgrimage sites as Jerusalem, Rome and Santiago de Compostela on the Way of St James.

“For Christians the idea of walking (in Jerusalem) where the Son of God walked on this earth and to stand at the place where He died and then rose is mind-boggling,” Sr Capets said.

“Jesus Christ Himself is the pilgrim whom we model.”

For those who could not get away for an extensive pilgrimage, she suggested they visit St Mary of the Cross MacKillop’s tomb at North Sydney and do the Stations of the Cross at any local church.