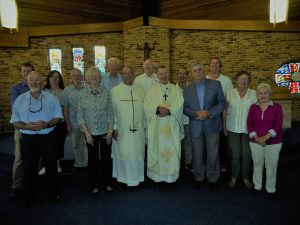 AFTER a long career as a radio officer in the Royal Australian Navy and in criminal intelligence in the Australian Federal Police, Mick O’Donnell first thought about a calling to the diaconate in the mid-1980s.

The celebration of his silver jubilee in the diaconate late last year gave him reason to reflect on his varied ministry.

A 20-year Royal Australian Navy Vietnam and Borneo Confrontation Veteran, he became the second married deacon in the Archdiocese, following Brigadier Vince Dowdy who was ordained at St Christopher’s Cathedral on August 10, 1972, by then Archbishop Thomas Cahill.

“I was inspired by Fathers Ken Barker MGL, Greg Beath and Bernie Patterson in the Catholic Charismatic Renewal in the late 1980s,” Deacon O’Donnell said.

“Every Sunday evening Mass at the Cathedral would be packed.”

Deacon O’Donnell studied at the Marist seminary in Hunters Hill, Sydney, from 1988 to 1991, was awarded a Bachelor of Theology, and was ordained by Emeritus Archbishop Francis Carroll at St Christopher’s Cathedral on November 22, 1991.

He was also awarded a MA in Theology from Australian Catholic University in 1997.

“I couldn’t have done anything without my wife, Cora,” he said.

“We minister together as a family.”

Over 52 years of marriage, they have raised three children, and are now blessed with 11 grandchildren and one great-grandchild.

He has fond memories of his archdiocesan appointments since 1991, including seven months in Cootamundra and 18 months as administrator of the Adelong-Batlow parish.

Time spent as a deacon has also included eight years as archdiocesan director of missions travelling to India, Sri Lanka and the Holy Land, and to Aboriginal missions around Australia.

This was followed by five years as chaplain to the AFP under commissioner Mick Keelty.

“Returning to the AFP as their chaplain was like returning home: where the vocational calling all began,” he said.

The Archdiocese’s nine permanent deacons gathered to mark the occasion at the end of last year with Emeritus Archbishop Carroll celebrating Mass at Page parish.

Deacon Joe Blackwell, a close friend of Deacon O’Donnell, described it as “a terrific occasion to come together to celebrate his 25 years in the ministry.

“Mick pioneered ministries within the Archdiocese that have proved suitable for other deacons, as well as being active in encouraging others in their diaconate vocation discernment and training.”

Now based at St Christopher’s Cathedral, Deacon O’Donnell is chaplain to the RSL and Vietnam Veterans Association.

He ministers at many funerals, veteran’s ceremonies and military reunions.

An author in his spare time, he has written three crime- fiction novels published by NovelSuite.