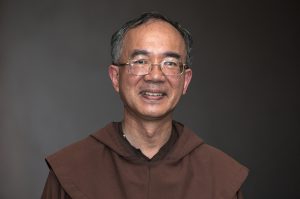 Bishop Jarrett has served the Diocese of Lismore for the past 15 years.

Fr Homeming is currently the Regional Vicar of the Discalced Carmelite Friars in Sydney, Australia. Speaking about his appointment today, he said, ‘I am humbled by the news. I knew that I had to say yes after the past 31 years as a Friar. There is a lot that I have to learn. I hope that the people and the priests of the Diocese of Lismore will teach me how to be their bishop.

I have travelled to the Diocese of Lismore many times as Superior of the Discalced Carmelites visiting the Carmelite nuns at Goonellabah, New South Wales’.

Archbishop Denis Hart, President of the Australian Catholic Bishops Conference, congratulated Fr Homeming following the announcement. ‘I join the bishops of Australia in rejoicing at the appointment of Fr Homeming as Bishop of Lismore. He brings wide experience as a retreat-giver, spiritual director and leader. His gifts will be a great enrichment to the Church in Australia.’

Born in Sydney on 30 May 1958, to a Australian Chinese family, Fr Homeming completed his primary education in Shepparton, Victoria and secondary school at St Aloysius College, Milsons Point. He took degrees in Economics and Law (B.Ec and LLB) at Sydney University and then worked as a lawyer in a Sydney law firm from 1981 to 1985.

At the end of 1985, Fr Homeming joined the Discalced Carmelite Order making his first profession on 1 February 1987. He then studied a Bachelor of Theology at Melbourne College of Divinity and a Masters in Philosophy at the University of Melbourne.

Fr Homeming was ordained a priest on 20 July 1991. As a Discalced Carmelite, he has held the positions of Major Superior, Novice Master, Prior and Retreat Director.

In addition to his love of spiritual direction and retreat formation, Fr Homeming enjoys reading, classical music, art and cooking Chinese meals for the friars.

Arrangements regarding the episcopal ordination are yet to be determined.