PRAYING silently outside an abortion clinic in Canberra will be a criminal offence attracting a fine of up to $3,500, under legislation passed recently.

The Health (Patient Privacy) Amendment Act 2015 Bill, introduced in the ACT Legislative Assembly by Greens Minister Shane Rattenbury, passed on October 29 with the support of the Labor Party.

The Bill establishes a minimum exclusion zone of 50 metres around approved medical facilities, where anyone wishing to protest, hold vigils or interact with visitors to the facilities will be prohibited from entering.

The ACT Liberal Party moved to amend the Bill to permit peaceful protests, but did not succeed.

For the past 16 years, prayer vigils have been held outside the ACT Health Centre in Civic. Earlier this year Archbishop Christopher Prowse took part in prayers outside the facility during the annual ‘40 Days for Life’ campaign. 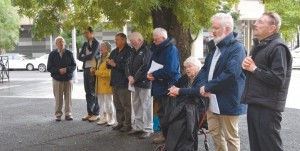 Pro-life prayer vigils have been held outside the ACT Health Centre for the past 16 years. PHOTO: MATTHEW BIDDLE

The Archbishop described the legislation as “cold and clinical”.

“It completely ignores the complexity of the abortion issue itself,” he said. “The real issue is trying to assist fragile women with unwanted pregnancies to consider deeply options other than abortion.

“Counselling must be given a higher imperative in our community to help women and men who find themselves in such lonely situations.”

ACT Right to Life president Bev Cains said the prohibition on any form of protest was “ridiculous”.

“What is the point of having human rights legislation when a majority in the Legislative Assembly can ride roughshod over the most basic human rights of freedom of assembly, religion, and protest?,” she said.

“A person on the opposite side of the road to the building need only wear a pro-life badgein their lapel, wear a pro-life t-shirt, or hold a pair of Rosary beads in their hands for someone to claim intimidation.”

The Australian Christian Lobby’s Wendy Francis said the Bill would do nothing to help women.

“This is a direct attack on freedom of speech and political communication on the contested issue of abortion,” she said.

“It will ban peaceful protests, prayer, support workers and councillors who can provide women with alternatives in a way that is not harassing or intimidating.

“This bill is aggressive and ideologically driven. It goes too far, ensuring that this kind of good can never happen in the ACT.”

The legislation is expected to come into effect in the middle of next year.