RCIA offers the most rewarding experience 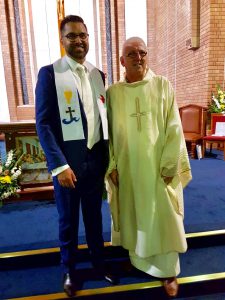 HIS mother was raised a Hindu, his father has a background in Islam.

This Easter, Sacha Jeeawody became a Catholic after completing the Rite of Christian Initiation of Adults.

Mr Jeeawody knew deep down that God was with him in good times and bad.

He says he encountered God most prominently on the basketball court, at his wedding, during his mother’s sickness and death, and through the birth of his son.

So, completing the RCIA journey and becoming a Catholic at the Easter Vigil was an “easy decision”.

“Honestly, if I had known how rewarding and pleasant the RCIA experience would be, I would have completed it earlier,” he said.

“My plan was to complete the RCIA prior to getting married, but it didn’t eventuate,” he said.

“My wife, who was raised Catholic, was incredibly supportive.

“My mother was raised Hindu in Singapore and converted to Catholicism when she moved to Australia,” he said.

“My father comes from an Islamic background and so I’ve been blessed to visit Hindu and Buddhist temples and mosques and observe different ways of prayer.

“But through it all, I always found myself thinking about God and giving thanks.

“I visited churches occasionally and would sit and contemplate.

Mr Jeeawody, who works as an account manager at a consultancy firm, paid tribute to the RCIA and parish team at St Raphael’s, Queanbeyan, for allowing the candidates to take it at their own pace.

“There was never any pressure to complete the course and be baptised.”

The program enabled him to “connect the dots” with psalms, disciples, biblical figures, chapters and verses of the Bible that he remembered from school.

“I’m pretty certain all the silly questions were being asked by me,” he said.

“If we had unresolved questions at the conclusion of the course, we were not obligated to continue.

“Other RCIA participants and I were very appreciative of this transparency.”

Mr Jeeawody is still on a “high” from being baptised and confirmed into the faith as an adult, where he took the name Gabriel.

He believes his decision to commit to Christianity has made him a more balanced person and has renewed him with a greater appreciation and sense of purpose, while also strengthening his bond with God.

The good news doesn’t stop there. His son Noah was baptised on May 21.

“I look forward to helping him on his spiritual journey,” he said.