Replace ‘cruelty’ with ‘politics of love’ 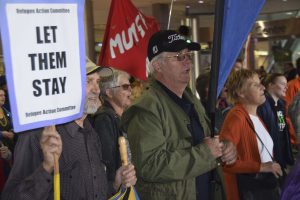 “WE should resist the politics of cruelty and replace it with the politics of love,” National Chief Executive of the St Vincent de Paul Society John Falzon told the “Welcome Refugees and Closer the Camps” rally at Civic on Palm Sunday.

Organised by the Canberra Refugee Action Committee, the crowd marched through the city to chants of “free, free, the refugees” and “here, here, bring them here”.

Bishop Power was given the task of co-leading the march.

Not happy with the plight of refugees and asylum-seekers, particularly those in offshore detention, members of the St Vincent de Paul Society and parishioners of Mary Help of Christians Parish South Woden displayed banners alongside those of other Church denominations.

A number of talks and testimonies were shared, and there was a strong student presence from universities in the ACT.

Refugee advocate Tim McKenna – a member of both the St Vincent de Paul Society in the ACT and the Catholic Alliance for People Seeking Asylum (CAPSA), was happy with the response from those who took part despite the weather.

“Protestors continue to seek to bring refugees into the country and to relocate asylum-seekers from off-shore detention centres on Manus Island and Nauru,” he said.

“We had parishioners here from Yass, South Woden, North Woden, Narrabundah and Waramanga, and it was great to see a united response to the urgent need to free the vulnerable people who’ve been incarcerated for nearly four years.”

Mr McKenna said it was encouraging that St Christopher’s Cathedral and other parishes in Canberra displayed banners advertising the protest in the weeks leading up to the rally.