Responsibilities in the debate 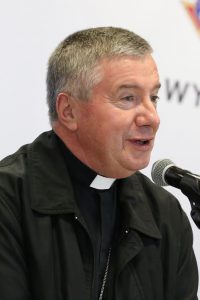 I am re-reading slowly Pope Francis’ AMORIS LAETITIA, the post-Synodal Apostolic Exhortation on Love in the Family. I hope many in the Archdiocese are doing the same.

There is a most pastoral observation on the education of children. Pope Francis applies to this topic the important principle in our Catholic Social Teaching on the inter-connectedness between Human Rights and Responsibilities/Duties.

“A balance has to be found between two equally harmful extremes. One would be to try to make everything revolve around the child’s desires; such children will grow up with a sense of their rights but not their responsibilities. The other would be to deprive the child of his or her dignity, personal identity and rights; such children end up overwhelmed by their duties and a need to carry out other people’s wishes.”(n.270)

A pivotal Catholic “instinct” of balance, common sense and prudence underpins this ethical principle of rights and responsibilities/duties. It can surely be applied to other social dilemmas of today. It can give a much needed ethical anchorage to such dilemmas that are so often characterised by slogans, emotive language and the absence of common sense arguments. We must not descend into what Pope Francis describes as ‘the culture of the ephemeral.” (Amoris Laetitia, n. 12, 4)

For example, the same-sex marriage debate comes to mind.

The arguments for marriage “equality” are usually highly emotive and so often deem any counter arguments as bigoted or homophobic. They are generally based on “my choice” arguments and choose to ignore any biological givenness towards the complementarity of the sexes.

On the one hand, society certainly needs to become more tolerant and understanding of same sex attracted people. History has shown that harsh treatment has deprived far too many of their human dignity, personal worth and fundamental human rights. This is illustrated in statistics that still indicate same-sex people as very vulnerable in the areas, for example, of mental illness and suicide.

We all have a responsibility/duty for a more tolerant social attitude to develop.

On the other hand, however, a balance must be found, lest another extreme opens up. That is, we may become so absorbed in the situation of same-sex attracted people, (many but not all who campaign for marriage “equality,”) that we lose our focus on our responsibilities to protect marriage as a time honoured social institution of love sharing and life giving between a man and a woman.

“Traditional” marriage is one of the greatest gifts humanity has passed onto us. It assures societal stability. It is a vital expression of human ecology.

Although Catholicism offers marriage a sacramental understanding, marriage itself between the permanent love bond of a man and a woman open to the possibility of children, has been a treasured human gift over the millennia by people of all faiths or no faith.

It is surely possible to be both sensitive to the basic human rights of same-sex attracted people and exercise our responsibilities to protect one of the greatest of all human treasures: marriage.

Finally, let us recall Pope Francis’ quote from the Synod Fathers in Amoris Laetitia, “As for proposals to place unions between homosexual persons on the same level as marriage, there are absolutely no grounds for considering homosexual unions to be in any way similar or even remotely analogous to God’s plan for marriage and family.” (n.251)

As the Australian people move toward decisions regarding the Marriage Act of 1961, let us keep a respectful balance in our public statements on this most controversial topic.

Applying our Catholic teaching on human rights and duties can help common sense to prevail.

Be aware of my prayers for your family and loved ones. Please pray for me sometimes.