Richard got offer he couldn’t refuse 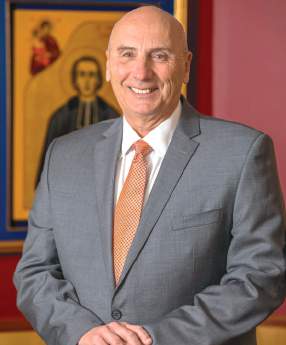 HE had nearly a year to think about it, but until recently Richard Sidorko was not sure what he would be doing next year.

“I was all prepared to do the gardening and the cooking,” he says, of life after 12 years as head of Marist College Canberra.

He was clear about what he did not want to be doing, however.

“I kept on telling everybody I was not going to go back into schools.”

He would be leaving Marist College on a high note and he knew the “privilege” would be hard to match.

The suggestions that he become an education consultant were also not enticing.

But, just as he was preparing to dig out the gardening gloves, along came an offer he couldn’t refuse.

His new role as principal of The John Berne School in Lewisham, Sydney, is hardly a sell-out, though.

As he points out, The John Berne School is not a mainstream educational institution, but “a very special school”.

It is a small Marist establishment, catering for up to 50 boys and girls who have failed to thrive in the school system.

Mr Sidorko’s challenge will be to not only ensure the educational (mainly basic literacy and numeracy) and transitional programs are effective, but to shore up the school’s fundraising base and strengthen the connection with mainstream schools from which the students are drawn.

Priding himself on being a “presence” among the staff and boys at Marist College, he is prepared to be even more so in the new job.

“It’s only a two-year appointment, so I will need to be dynamic and present from the start,” he says.

Wife Berenice, a teacher at St Mary MacKillop College, and children Lily and Joe will stay in Canberra for a year while Joe finishes year 12 at Marist College.

Mr Sidorko will take with him the wisdom he has gained from a tenure at the college that has been both more rewarding and more challenging than he could have imagined.

He is the first to recognise his reign will be defined by the fallout from sexual abuse claims against Marist brothers.

But, while he admits to “mishandling a couple of things, which I have apologised for”, his leadership through the ongoing crisis has been praised and the Liturgy of the Lament he initiated last year will be a legacy.

Mr Sidorko is delighted at the way the college, which Marist Schools Australia national director Dr Frank Malloy describes as “a lighthouse Catholic school nationally”, has thrived despite the scandal.

“If any school in Canberra should be losing numbers hand over fist, it should be us. But our numbers are good,” he says.

And he is proud of what he is leaving behind.

“If people asked what I wanted on my tombstone when I leave here, it would be ‘He did good’ – did good in learning and teaching; did good in the quality and authenticity of our Maristness; and did good in developing a strong spirit in our community.”