Robbie bags a swag of medals 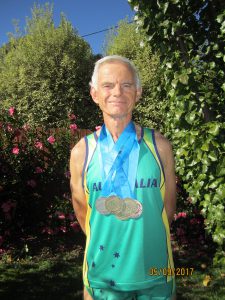 AS a rule, Robbie Costmeyer, finance officer of Corpus Christi Parish South Tuggeranong isn’t someone who seeks the limelight.

But it’s hard not to draw attention to yourself when you travel to New Zealand for the World Masters Games and come home with a swag of medals.

He also claimed a silver medal in the 1500-metre race and, on the last day of competition, won a bronze medal in the 6km cross-country.

Mr Costmeyer said he went to NZ with the goal of breaking some ACT records for his men’s 70+ age group, which he graduated into last December. He considered winning a medal would be a bonus.

“There was a good deal of competition and incentive to do well in my five events,” he said.

“I managed to break three ACT records, but a fourth, in the 10,000 metres, eluded me by a mere two seconds, my only disappointment.

“However, to my surprise the two best athletes in the world in my age group, one Frenchman and one Australian, did not come to Auckland and I consequently featured in the medals.

“One can only compete against those that front up for each event.”

Mr Costmeyer enjoys running each week and has no plans to retire as he hopes to compete in the next World Masters Athletics Games in Spain in September 2018.