Senator: Let your views on marriage be heard

WITH Australia on the verge of a national plebiscite on the issue of same-sex marriage, it’s important for individuals to “stand up for what they believe in”, according to ACT Liberal Senator Zed Seselja.

Senator Seselja spoke to parishioners of St Thomas the Apostle Church in Kambah recently, on the topic of ‘Why we should support marriage’.

Speaking to Catholic Voice after the event, Senator Seselja said his main message was to encourage those present to speak about issues that they feel strongly about.

“It’s not about convincing people of a particular case, it’s about giving them the encouragement and tools to be involved and to be part of a public discussion, because I think there are many in the community who feel that a lot of issues are just too big,” he said.

“But it all starts with individuals or groups making decisions to be involved.” 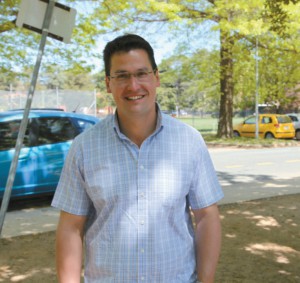 Senator Zed Seselja says it’s important for individuals to have their say on matters they feel strongly about. PHOTO: ONLINE

The 39-year-old said he would be happy to speak at other parishes in the Canberra region.

“I’m always sensitive when I go to churches or community groups that I’m not there to deliver an overtly political message, certainly not a partisan message,” he said.

“It’s more about enlivening our community to be involved, to consider the big public policy questions that are in front of us, and churches have a really important and legitimate role to play in that.”

The former leader of the Liberal Party in the ACT said there were numerous ways individuals could get involved in political matters and ensure that their voices are heard.

“I think getting informed is important, and secondly, communicating with your elected representatives,” he said.

“You should do it in as personal a way as possible. While an email is good, particularly if it’s a personally-drafted email rather than a mass-produced email, a hand-written note is better.

“A phone call is good as well, and obviously if you can grab your local representative when they’re at a local shopping centre or out and about in the community, then that’s a really good way of doing it.”

“The more people who stand up for what they believe in, the more others in the community who feel the same way will feel encouraged to do so as well,” Senator Seselja said.