IN THE first Hotel Transylvania, a human visitor to Dracula’s titular guesthouse ultimately bridged the human-monster divide, bringing the formerly incompatible communities together. Outside of Aardman, Pixar and (occasionally) Dreamworks, few animation houses strive for excellence, and this sequel from Sony Animations seems happy to cater for the less scrupulous, younger viewers. Sure, its slapstick is occasionally funny, but parents may find themselves occasionally checking their watches.

We open with the wedding between human Jonathan and Dracula’s daughter Mavis, and quickly move through the five years following their nuptials. They have a son, Dennis (or Denisovich, if you ask his grandfather Drac), a little tot who has inherited his dad’s large and buoyant red hair. Dennis displays no signs of inheriting his mother’s vampirism, much to his grandfather’s dismay, and Mavis begins to consider emigrating their family to California.

Dracula cooks up a plan with Jonathan to dredge up Dennis’ taste for blood. While Jonathan and Mavis tour Santa Cruz, CA, Drac and his buddies Frank (Frankenstein’s Monster), Wayne (Werewolf), Griffin (Invisible Man) and Murray (the Mummy) take the tyke out for a few tutorials in the art of becoming a monster. With a deadline set (Dennis must sprout his fangs before his fifth birthday), the monstrous mob have to race against the clock, or risk losing Dennis, Mavis and Jonathan to California forever! 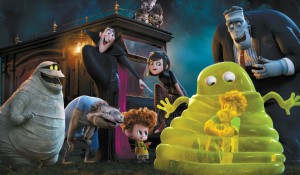 Hotel Transylvania 2 is likely to be popular in cinemas in the coming school holidays. PHOTO: ONLINE

On two occasions, a character refers to Drac as Dennis’ ‘Vam-pa’. The joke is immediately apparent, but in both instances, the portmanteau of ‘Vampire’ and ‘Grandpa’ is explained at length. This level of intellect seems to sum up the whole film. The script, written by Adam Sandler and Robert Smigel, aims for simple humour, and it’s all too obvious for those hoping for some emotional and comedic nuance. Admittedly, some of the jokes work. A gelatinous lump aptly named Blobby, who can apparently absorb and store all manner of paraphernalia in his translucent body, provides a number of good slapstick moments. There’s a nice underlying message throughout the film, conveying how it’s okay to be different, but this is somewhat undermined by the predictable conclusion.

In the voice cast, a handful of prized (or once-prized) comedians sound as though they’re just gunning for a pay cheque. On the other hand, Selena Gomez is surprisingly strong as Mavis, conveying plenty of emotion beyond her relative youth, and Mel Brooks, playing Drac’s father and Nosferatu-esque vamp Vlad, is always a welcome presence.

With the Christmas school break looming, this will probably get a fair amount of business until Pixar’s The Good Dinosaur lumbers into cinemas. If you liked (or endured) the first film, this will probably satisfy your needs. Kids could certainly do worse than Hotel Transylvania 2, but parents will just as certainly hope for better come the next school holidays.

Callum Ryan is an associate of the Australian Catholic Office for Film and Broadcasting.