Service to Church ‘a joy and a privilege’ 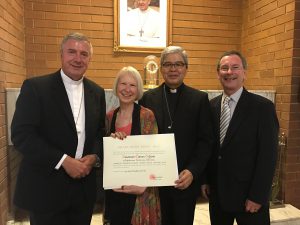 HARDEN-MURRUMBURRAH’S Sue Orchison says she couldn’t be happier after receiving a papal honour for 16 years’ service to the Church.

Mrs Orchison was awarded the Dame of the Order of Pope St Sylvester I following a career which saw her work for several bodies in the Church.

Apostolic Nuncio Archbishop Adolfo Tito Yllana invested her at a farewell lunch on her retirement attended by Archbishop Christopher Prowse.

Mrs Orchison, an accomplished iconographer, said she got “quite a surprise” when told that she had been recognised for her time working for the Church.

“I wrote a small message to the children which taught me so much about my faith in a simplified manner,” she said.

“I’m told it was popular reading with the adults and children.”

Following this, she became a secretarial assistant at the Australian Catholic Bishops Conference) and later joined the staff of the Apostolic Nunciature in Red Hill where she processed requests for papal blessings.

At the same time she joined the Archdiocese in a number of part-time capacities including working in the archives and also for the Clergy Retirement Foundation.

The award is most fitting for Mrs Orchison considering her love for the Church which is evident in her appreciation of its members.

“It has been a joy and privilege working for the Catholic Church of Australia,” she said.

“It is an honour to serve our beautiful retired priests who have given their lives to God and to us.

“The Nuncios whom I assisted have a great heart for Australia. They travel to the ends of earth to be here with us, then travel to the remotest towns to bring the presence and love of the Church to people.”

She also recalled a couple of stories of her time working for the Church.

“One of my precious memories was assisting in the office at plenary meetings of the Australian bishops in Sydney,” she said.

“I would join the bishops for Mass in the morning and read the first reading and psalm, and remember going over the reading repeatedly the evening before to understand the meaning of what being said and deliver the Word with clarity, understanding and revelation to the 30 bishops present.

“A daunting task but one I relished with shaking knees.”

The other one involves a couple of archbishops from the Archdiocese past and present:

“I was at the first plenary meeting Archbishop Prowse attended in 2003,” she said.

“During that time Archbishop Francis Carroll was president of the ACBC.

“After one plenary meeting I drove him, in the driving rain, back to Canberra.

“We said the Rosary on the way and arrived home safe and sound.

“I have a great love and respect for bishops and the difficult ministry they have in our Church and in the world today.”

Her ministry in iconography began at St Benedict’s, Narrabundah, in 2003 and continues to this day, where she runs workshops at St Clement’s Monastery in Galong.

“Our faith is so rich and exciting,” she said.

Two of her icons of St Mary MacKillop are displayed at St Christopher’s Cathedral and at Sale Cathedral. She also has works at the Apostolic Nunciature, parishes and schools and private collections in many parts of Australia.

She was a part of the music ministry for two decades at Kambah parish, and has continued this at Harden-Murrumburrah.

Like many Australians, she has a special affection for St Mary MacKillop and considers herself fortunate to have been at her canonisation in Rome, while she also feels blessed to have met Pope Benedict XVI when he came to Sydney for World Youth Day in 2008.

Mrs Orchison also paid tribute to her husband for his love and support.

“I am blessed to have Geoff as my husband with whom I walk each day of our 39 years of marriage in the faith that strengthens and supports us and our family,” she said.