The ‘me’ society and the drive for real happiness 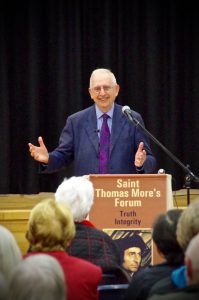 Despite some not believing in God, Australians were sending their children to religious schools in increasing numbers, he said.

In a talk on how beliefs can get in the way of faith, Mr Mackay spoke about the constant desire for happiness and the “me” society.

Australians think they are entitled to become more prosperous and that it is all about “me”. If they are not happy then invariably the response is to go out buy some material item.

“This is not real happiness and increasing numbers of particularly younger Australians understand this,” he said.

Young people were asking more questions on spirituality than ever, but they were still searching for the values of “love thy neighbour” taught by the different religions.

Mr Mackay said there were many different paths for young people interested in spirituality.  Although they may not be drawn to churches, many still believed there was a spiritual dimension and that all were connected as one.  They believed they could aspire to something bigger than themselves.

Mr. Mackay spoke about a society where 61 per cent of the population identified as Christian, 67 per cent claimed to believe in a God or higher being, yet only eight per cent attended church weekly.

He also spoke about the rise of non-religious spirituality in the context of our persistent desire for a sense of meaning.

Like most Western societies, Australia is experiencing a sharp decline in religious faith and practice – at least as measured by regular church attendance.

Yet the desire for a sense of meaning and purpose was undiminished, as shown by the surging “spiritual but not religious” movement and the growing interest in Eastern mysticism.

One reason people had deserted the institutional church was their resistance to dogmatic, prescriptive beliefs that often seemed to inhibit, rather than encourage, spiritual growth.

Mr Mackay is the author of 17 books. His latest book, Beyond Belief, explores the changing role of religion in Australia.

Campbell parish priest Fr Julian Wellspring said Mr Mackay had told stories about ourselves and that he was, indeed, a national treasure.

Mr Mackay and his wife Sheila will move to Canberra to live permanently in the New Year.