The small group of women clustered around a coffee table at the Canberra Yacht Club reminisce as old school friends do – recounting their own versions of shared experiences and challenging each other’s memories.

Any disagreements are good-natured, but one thing they categorically agree on is the special nature of their bond. 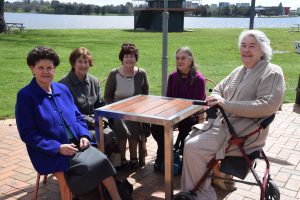 The five women at the table, plus one who usually joins them for their occasional get-togethers but could not make it this time, are the six girls who graduated from St Christopher’s School in Manuka in 1956.

They were the sum of the final fifth year, with most of their 30-plus female classmates having left school earlier and the boys having moved to St Edmund’s College when it opened in 1954.

The fact the six of them are still around Canberra, and still friends, 60 years later is something for them all to treasure. As one of the friends, Mary Gellatly says, “We’re very lucky.”

Four of the group – Mary, Elizabeth Coburn (nee Henry), and sisters Trish Hackwill and Maree Robertson (both nee Rogers) – have known each other since they started at St Christopher’s in kindergarten.

The other two – Helen Webber (nee Jordan) and Maureen Spicer – came from St Patrick’s to join them in high school. The women, who all have children and grandchildren, moved into the the public service, teaching and other pursuits after finishing school.

The demands of work and growing families took over their time for many years before the group hooked up again in the 1980s. In more recent years, the women have made a point of getting together a couple of times a year.

Apart from memories of “serge tunics, long stockings and suspender belts”, as Helen puts it, the 60th anniversary gathering featured animated discussions about, among things, marching from Kingston shops to Manuka Oval on St Patrick’s Day, playing hockey under Commonwealth Avenue Bridge and memories of the “Good Sam” sisters who taught them.

Helen says they were friends from the start. “Everybody got on. There was none of that bullying.” Trish and Maree walked to school from their home in Forrest, while Elizabeth rode her bike, often reading Shakespeare while riding back from lunch.

Maree fondly remembers the singing they were always doing and enjoyed being in the same year as her sister, who stayed back after illness interrupted a year of her primary schooling.

“We had a good time together, didn’t we?” she says, looking at Trish.

Trish doesn’t seem so sure, mainly because school just wasn’t her thing. “My happiest day was when I left,” she says.

Meanwhile, Helen’s declaration that the girls were “so pleased when the boys went to St Eddie’s” also meets with a mixed response. The differences of opinion and memory only seem to strengthen the bond between the women.