Thankful for 150 years of blessings

Since its establishment in 1865, the parish of Pambula has endured everything from floods to bushfires, yet one thing has remained constant – the strong, unwavering faith of the Catholic community. The parish’s 150th anniversary celebrations on November 8 were a chance for all members of the community to reflect upon the many blessings God has bestowed on the parish over the years…

ARCHBISHOP Christopher Prowse joined the Parish of Pambula for their sesquicentenary over the weekend of November 6-8, linking it with his official canonical visitation.

The 150-year celebrations began in the Bega Parish earlier this year, as the two parishes were originally formed as one parish in 1865. By 1886, the parish was large enough for Cardinal Moran to create the two separate parishes of Bega and Pambula.

The Archbishop commenced his visitation by meeting with the staff and students of Lumen Christi Catholic College at Pambula Beach on November 6. 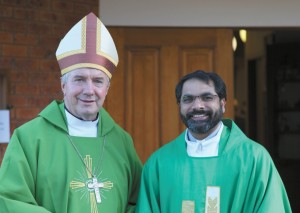 Later the same day, Archbishop Christopher met with the combined parish pastoral council and other members of the parish for prayer, discussion, evaluation and guidance.

On November 7, the Archbishop joined Fr James Antony CMI in visiting one of the parish’s Mass centres at Eden, where he met the local Sisters of St Joseph, Sr Rosemary Hart RSJ and Sr Brigid McMahon RSJ.

Parishioner and local historian John Liston then delivered a talk on the pioneering missionary priests of the region, who from the early 1840s travelled from their mission at Queanbeyan or Moruya to the Twofold Bay district to celebrate the sacraments with Catholic settlers and build permanent church communities.

Mr Liston also spoke of the connection St Mary MacKillop had with the parish convent school and the unbroken 124- year presence of the Sisters of St Joseph in Eden after the tragic drowning of the Australian saint’s mother, Flora MacKillop in the 1886 shipwreck.

The Archbishop also spent a significant time at Imlay Nursing Home, anointing the sick and elderly and distributing Holy Communion.

During the 5pm Mass on November 7 at Star of the Sea Church in Eden, the Archbishop spoke of the importance of developing a prayer life and giving loving service to Christ’s poorest, like feeding the hungry, visiting the sick and giving shelter to the homeless.

After Mass, more than 100 parishioners joined the Archbishop at the Merimbula RSL for dinner, after which Archbishop Christopher launched the history book written by Mr Liston for the 150th anniversary titled, Faith of Our Forefathers, Living Still.

The weekend’s celebrations concluded on November 8, when the Archbishop and Fr James offered Mass at St Joseph’s Church, Merimbula.

During the Mass, a new parish prayer book was launched, and Archbishop Christopher blessed the couples in the parish who have reached 50 years or more of marriage. He also prayed particularly for the religious Sisters present, who were representing the 96 Sisters who have served in the parish over the past 124 years.

“We thank the Lord for all the many blessings he has given to the parish of St Joseph’s, Pambula over the last 150 years,” the Archbishop said.

“It’s been a difficult time over the years. The first church floated away in a flood. The second church was burnt to the ground in a bushfire. Some of the more pessimistic people I’ve met over the last few days are saying in the present moment that the people are staying away from the Church.

“But, whatever the joys or the sorrows are, I thank you with all my heart as your Archbishop for working so hard over the past 150 years.”

In concluding his homily, the Archbishop offered four challenges for the parish in the years ahead. 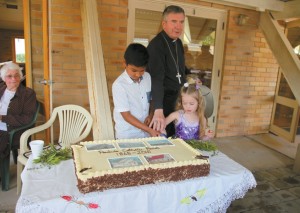 The Archbishop and two children of the parish cut the anniversary cake. PHOTO: SUPPLIED

“This parish has a great sensitivity to widows, the bereaved and those who are grieving,” he said.

“May this animate this particular ministry that clearly continues on here, particularly with such an ageing demographic.”

Creating and maintaining strong links between the parish and Lumen Christi College was another important challenge for the community, as was the need to continue to stand alongside the local Aboriginal community, the Archbishop said.

The final challenge for the parish referred to the “mystical, or vertical, dimension of the parish’s life”.

“Hopefully we can encourage mediation groups to flourish in our parish,” Archbishop Christopher said.

“This will help people to listen carefully and savour deeply the beauty of creation, to help them see the beauty deep within the human heart.”

Many of the parishioners then journeyed to the 148-year-old St Peter’s Church in Pambula where the Archbishop unveiled a plaque at the entrance of the church, commemorating the parish’s milestone.