There’s no snags in the way of Lino’s generosity

THERE is nothing quite like a freshly cooked sausage to warm the heart on a cold winter’s day.

Those who attended the Central Deanery Assembly at St Clare’s College in chilly mid August, are likely to remember the overriding waft of barbequed sausages at lunchtime. 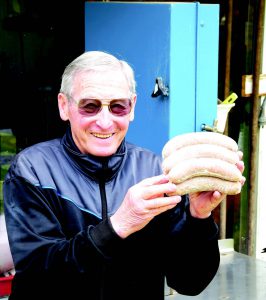 Born in Italy, Lino Rovere made a career as a butcher and he continues to make sausages to this day. Picture: John McLaurin.

These weren’t just any old snags, however; they were home-made ones by Lino Rovere from Mawson, ACT.

Mr Rovere has been feeding the masses for a long time starting off as a butcher in 1957.

Born and bred in Italy, he migrated to Australia from Switzerland in 1962, following the lead of his brother Mario and his parents who made the move.

The son of a struggling textile merchant, Mr Rovere grew up in the picturesque Alpine town of Tarcento.

His lifetime hobby is cycling, which he competed regularly in at amateur level.

“Growing up in Italy in the years following World War II, times were tough and my parents found it very difficult to make ends meet despite working hard,” he said.

As the youngest son, he moved to Switzerland for work. In Switzerland between 1957 and 1962 he learned the butcher trade before joining his family in the ACT.

Mr Rovere went on to own and operate a butcher shop in Queanbeyan which specialised in small-goods.

He retired fulltime as a butcher when he sold up in 1988, but worked part-time at a meat wholesaler until 1997.

He kept his tools along with the industrial equipment which are now set up in his shed. To this day he continues to make the smallgoods at his home, but they are not for sale.

The retired butcher is happy to make the snags for friends, while sometimes he supplies for a few small-scale functions, especially if they are for a good cause.

He refuses to take any financial incentives other than to pay for his costs and the contents of any “golden handshakes will find their way to a charity”, he said.

He volunteered in 1969 with the St Vincent De Paul mission team serving in Papua New Guinea.

The community of Goroke benefited as he taught them the art of cutting up meat among other things.

He nearly didn’t make it back home and says he is “lucky to be still alive” after he fell nearly 50m when the road he was driving on crumbled in a landslide.

Mr Rovere is now content as a member of the Canberra Swiss Club, the South Woden Catholic Parish and the St Augustine conference of the St Vincent De Paul Society in Canberra.