Twenty-five prepare to enter the Church

THE example of a faith-filled school community was the catalyst for Lee Anne and Damien Howse to decide to become full members of the Catholic Church.

As a catechumen – someone who has not yet received any of the Sacraments of Initiation – Mrs Howse will be baptised, receive Holy Communion and be confirmed at Easter.

Mr Howse, a candidate – someone who has been baptised and seeks to complete their sacramental initiation – will receive the Sacraments of the Eucharist and Confirmation at Easter.

Mrs Howse told Catholic Voice the family’s involvement with Mother Teresa Catholic Primary School in Harrison had been instrumental in creating a desire to enter the Church in not only the hearts of the married couple, but also in the hearts of their children. 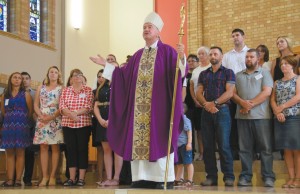 Archbishop Christopher Prowse delivers his homily during Mass at St Christopher’s Cathedral on February 14, surrounded by those preparing to enter the Church at Easter and their sponsors. PHOTO: MATTHEW BIDDLE

“Our twin girls, who turn 14 shortly, have always had an interest in religion since toddlers, and we enrolled the girls at Mother Teresa School for their education and found it was much more than just education but an all-round inclusive education of life,” she explained.

“Mother Teresa School led us to attending Mass regularly and then the girls asking to be baptised.

“We had been attending Mass for around six years and last year… I decided I too wanted to go the next step and be a member of the Catholic faith, and now I can devote my full thoughts to learning and understanding the faith further.”

Mr and Mrs Howse were among a group of 25 catechumens and candidates who took part in the Rite of Election at St Christopher’s Cathedral on February 14.

Prior to the Mass, the individuals each had the opportunity to speak with Archbishop Christopher Prowse about their motivations for entering the Church during a special gathering in the Cathedral crypt.

“I asked them the same question, ‘What attracts you to the Catholic Church?’,” Archbishop Christopher explained during his homily for the Mass. “I was really touched by their answers. I think the word I heard most was the word ‘depth’; the depth of the Catholic faith attracts them.

After speaking with the Archbishop in the crypt, the catechumens and candidates then signed their names in the Book of the Elect as a pledge of their fidelity and an affirmation of their intention to join the Church.

Archbishop Christopher will lead a series of formation evenings for parishes interested in the Rite of Christian Initiation of Adults (RCIA) program in May and June. The planned dates for the evenings are May 25, June 8 and June 29. For further information contact Sharon Brewer on (02) 6163 4300.