THE Archdiocese’s Ukrainian Catholic community gathered on January 7 at St Michael’s Church in Queanbeyan to celebrate Christmas Day according to the Julian calendar.

About 80 people were present for the Mass, celebrated by Ukrainian chaplain Fr Laurie Foote OP.

Ukrainian (Eastern) Catholics celebrate Mass, often called the Divine Liturgy, according to the Byzantine Rite; in contrast to Western Catholics who celebrate the Roman Rite of the Mass.

The liturgical seasons of the Byzantine Rite are determined according to the Julian calendar, which was followed by all churches in the early centuries. The Gregorian calendar was later adopted by most churches, however, the Ukrainian Church decided to retain the Julian calendar.

The Christmas Mass was the last liturgy celebrated by Fr Laurie as chaplain to the community, with the arrival of Fr Nikola Segedi on January 10. 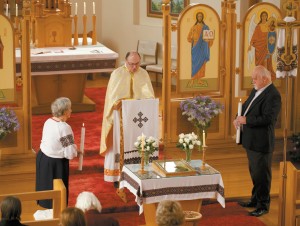 Fr Laurie said after taking a short break away from Canberra, he will return in time for the start of the university year to resume his role as chaplain at the Australian National University (ANU).

He said he had enjoyed his time serving the Ukrainian community over the past two years and intends to visit regularly in the future.

“I will pop over for a cup of tea quite regularly. If there’s a lunch happening make sure you invite me,” he told the congregation at the conclusion of the Christmas Day Mass.

Unlike most priests serving the Ukrainian Church, the multilingual Dominican didn’t grow up speaking the language.

“I started learning it when I was at the Dominican parish in Adelaide,” he explained.

“Just by chance I got to know the Ukrainian priests and nuns, and I used to talk to them in Croatian, and they would talk back to me in Ukrainian. Slowly, I started to get the hang of Ukrainian.

“Then I got sent to Melbourne to be chaplain at Monash University… and there I started to study Ukrainian and slowly started to pick it up. My Ukrainian’s not brilliant, but it gets by.”

There are a number of differences between the Roman Rite of the Mass and the Byzantine Rite, although both are legitimate forms of the Catholic Mass.

The liturgy of the Byzantine Rite is based on singing and praising God, and the congregation stand for the majority of the Mass.

Pieces of bread cut into little cuboids and soaked in wine become the Eucharist during the consecration.