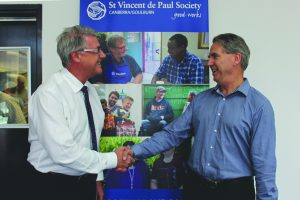 BARNIE van Wyk has filled the CEO’s chair for a few weeks, but he has grand plans for the future of the St Vincent de Paul Society Canberra/Goulburn.

Mr van Wyk succeeded Paul Trezise who retired this year and was farewelled last month at the society’s office in Deakin.

Mr Trezise’s farewell was attended by about 40 people including society board members, employees and volunteers.

They were delighted by his claim that the CEO position was the best job he’d had.

“I am humbled both by his efforts in SVDP and to have received such a comprehensive and supportive handover,” he said.

From a man whose own resume includes upper-level management in the business sector in his native South Africa, as well as nine years on the Royal Australian Navy’s Central Canteen Board, an integral position in rolling out the first 15 trial sites of the NDIS and work in the transition of property management for the Department of Human Services, this is no small accolade.

Over the course of his tenure as St Vincent de Paul Society CEO Mr van Wyk has set himself a “massive task”.

He intends to guide SVDP in the creation of a new strategy to address homelessness and create a more suitable and affordable housing situation.

Acknowledging the work of members, and increasing community engagement are also on the list, as is a strong focus on attracting more members and volunteers in the 25-55 years age group.

He wants to strengthen existing partnerships and create new ones across all areas of the society’s work, and to bring innovative approaches to strengthen strategies already in place.
He credits the platform built by Mr Trezise as giving the society the resources to achieve these goals and he is confident they will deliver results.
“The organisation is in great shape,” Mr van Wyk said.

“The people around me here are amazing and have real passion for what they’re doing.”