Where mercy is needed most

Many inmates in one of Australia’s highest security prisons have a strong relationship with God, according to Goulburn Correctional Centre chaplain Julie Kelly.

The mother-of-three has been working at the prison for almost two years, and says the level of faith she has witnessed growing in the hearts of some inmates has been extraordinary.

“The men here, although many of them do not believe it, are in such a state of grace,” she says.

“It is an amazing, humbling experience to listen to them talk about their life experiences and where they have met God. In their wildest dreams, they cannot grasp how God could forgive them. It’s a privilege for me to walk on a spiritual journey with these men.”

Ms Kelly took up the position of full-time chaplain after spending more than 30 years working for the Church in a variety of roles. She says she was blissfully unaware of the demands of prison chaplaincy when she first applied, but trusted that God was calling her to this ministry.

“My constant prayer each day is that I will get out of the way and let the Holy Spirit work in the lives of these men,” she says. “All I can do is provide a safe space so that the men can engage with God.”

The Correctional Centre is divided into many areas with differing security needs, where men serve various times for a range of offences. 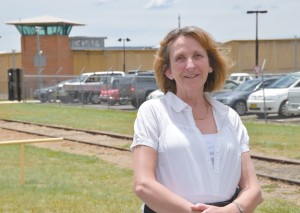 Prison chaplain Julie Kelly says inmates of the Goulburn Correctional Centre are excited about the Year of Mercy and the opportunities it presents them with. For many, learning to forgive themselves for their crimes and accepting the forgiveness of God is a long and difficult process. PHOTO: MATTHEW BIDDLE

As relationships build, inmates feel safe to speak with her privately, Ms Kelly says, allowing themselves to be vulnerable in such an intense setting.

“Many of the men start off coming to services only for the tea and biscuits,” she says. “But we’re now at the stage where if there’s no food they come anyway.

“Recently, there’s been a sudden increase in demand for Rosary beads. There are now small groups forming across the Centre to pray the Rosary together.”

Inmates of the Centre vary greatly in both their views regarding faith and their level of engagement, Ms Kelly says.

“As a prison chaplain I am there to meet the spiritual needs of all, regardless of their faith background, their depth of knowledge or the length of their spiritual journey,” she says.

While not all of the men are comfortable talking about God and matters of faith, Ms Kelly says there is no inmate “who has not faced God”.

“At one of our discussions, one man said, ‘I used to shoot up outside a church when I knew everyone was inside for Mass, and I would think ‘They don’t know what they’re missing out on’. Now I know I was the one missing out. If I had been in that church I wouldn’t be in the state I am now and I wouldn’t have wasted my life’,” Ms Kelly recalls.

Although she is surrounded by some of Australia’s most dangerous inmates, Ms Kelly says she has never felt afraid or unsafe when visiting the inmates.

“There’s never a time when you’re not being watched by an officer,” she says.

“I’m very aware that I work with unpredictable people in a precarious, intense environment all day, every day, and if you ever forget that you put yourself and officers in danger.”

There are other challenges to her role, such as various personal requests from inmates and staff and unexpected lock-downs.

“One of the hardest things for me to learn when I first started was that it can be unpredictable,” Ms Kelly says. “I have learnt to be very flexible.”

The Jubilee Year of Mercy, she says, is a wonderful opportunity for the men to experience the healing and forgiveness of God.

“I think the Year of Mercy is very exciting… and I think it can change the men’s lives,” she says.

“Many of them are having difficulty moving on. To accept forgiveness and to forgive themselves is the hardest thing.

“Many of these men have never known or experienced unconditional love.”

For those outside the Correctional Centre wishing to practice the corporal work of mercy of visiting the imprisoned, Ms Kelly suggests a number of ways one can make a positive impact on the lives of the inmates.

“Prison chaplains can be assisted in a variety of ways, apart from people coming into a Centre to visit,” she says.

“Many of the housebound and elderly tell me they have taken these inmates into their hearts and pray for them regularly. Others send donations of various items, like holy cards and prayer resources.

“Some inmates have no family or friends and they would love to receive a letter in the mail from the outside just talking of ordinary, everyday life.”

While she acknowledges that working as a prison chaplain has been a “steep learning curve”, Ms Kelly believes the experience has taught her a lot about her own life and deepened her faith.

“It has brought me down to the most basic level of humanity,” she says.

“The small things become irrelevant… these men have given my own life perspective.

“And the Scriptures have become very real for me. Although I’ve worked with the Scriptures in various groups and contexts for many years, sharing the Gospel with these men has given a whole new dimension to the Word of God.

“I thank God every day for the opportunity to share life with these men. What a privilege.”