Young rugby players get their ACT together

It has been an “enjoyable ride” for the team coached by Josh Vaughn and David Boyle and managed by St Clare’s College teacher Kym Darmody. 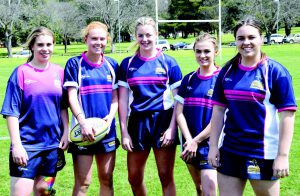 It has been a roller-coaster ride for the ACT players who have come up against some powerful units, particularly the formidable New South Wales line-up.

But the team has had more than its fair share of moments to be proud of, none more so than their encounter with a powerful New Zealand outfit.

In a fast paced match, the travelling Kiwis were far too strong for the ACT played on the lush surface at Duntroon Military College field, winning 44-10. The ACT conceded size, strength and experience to a slick and well-drilled Kiwi party.

Despite a willing affair out in the middle of the park, the two teams gelled well after the siren, sharing many laughs.

The New Zealanders provided the home team and spectators with a rendition of the haka.

The experience of playing against an international team was not lost on Amy Daniel who treasured her place in the squad.

“I never thought that I’d be apart of the U18 schoolgirls Brumbies team for 2016.

“It meant a lot to me to get into this amazing team and I have learnt a lot of new skills from being a part of the schoolgirls this year,” she said.

“My favourite memory would be meeting new people from New Zealand. They were very nice girls and you could see that they were very passionate about their rugby.”

Erin Chant was equally thrilled about being a part of the Brumbies junior set-up. “It means a lot to be chosen for the ACT under-18 rugby team and the experiences I have gained from playing at such a high standard will always be invaluable,” the Year 11 student said.

Chant’s classmate Violetta Tupuola showed enough form in season 2016 to be selected to train with the Australian Wallaroos women’s team. She puts this down to her time spent in the Brumbies under-18 camp.

“With the schoolgirls I have expanded my skills and confidence,” she said.

“Being selected in the ACT team has given me the opportunity to train with the 2016 Wallaroos squad.”

Manager Kym Darmody has seen the team and its members develop as players and she continues to enjoy the experience of being involved.

“I have been involved in a coaching and managing role for the past six years with ACT school girls,” she said.

“It has been such a great experience gaining further knowledge of the game, working closely with other coaches and getting to know a wide range of girls and their parents.”