Youth rally with a buzz of energy 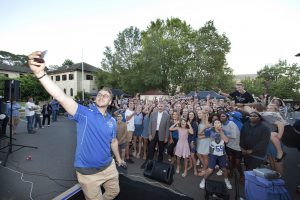 AN exciting new buzz and energy was most evident in St Christopher’s Cathedral as young Catholics took part in the Archdiocesan Youth Mass and Rally before the CSYMA LEAD conference.

They came from all parts of the Archdiocese as well as from neighbouring dioceses and also internationally.

About 300 young people attended the Youth Mass before moving across the road to the Catholic Education car park for the youth rally.

The rally, which was animated by youth ministers from across Australia, New Zealand and England, brought a bare carpark to life on the night with music from Canberra musicians, sharing from St Edmund’s and St Clare’s senior students, and an opportunity for a prayer response.

Archbishop Christopher Prowse was main celebrant at the Youth Mass and later mingled with young people at the rally.

He thanked the youth for making the effort to be there and acknowledged clergy for concelebrating at Mass and taking part in the rally.

Archbishop Prowse implored everyone to pray for the success of the new youth ministry model in the Archdiocese.

He reminded everyone of their Christian responsibility to be evangelisers.

He invited the young people to “go on pilgrimage” with him as together they look forward to an added focus on youth in the Archdiocese over the next three years.

Next year will mark the 10th anniversary of World Youth Day in Sydney.

Archbishop Prowse then turned his focus to World Youth Day in Panama 2019.

“I want to take to Panama the biggest World Youth Day group we’ve ever taken from the Archdiocese, so start saving your money now.”

In his homily, Archbishop Prowse reflected on a story which appeared in a recent edition of Australian Catholic about Fr Robert Galea, “the singing priest” from the Sandhurst Diocese.

He talked about Fr Galea’s journey of faith and how at the age of 17 he desperately reached out to God in prayer.

It was at this point that the young priest’s relationship with God and others really began to develop.

Coming from Daly River in Northern Territory, three young indigenous members gave the welcome to country in the Cathedral and Stephen Kirk led the congregation in music at Mass.

At the end of Mass, all of the Youth Ministry, the leaders who attended the Equipping School, were commissioned by Archbishop Prowse and given a blessing.