As I was heading back for another term of teaching and learning, attending professional development and preparing courses with my colleagues, I was reminded of an insight gained on a retreat late last year. On the opening night our presenter spoke of a Zambian proverb, You run faster when you run alone, but you run further when you run together.

Coincidentally, I was invited to go for a run the next morning with some guys I’d met that evening. I froze at the thought of running with them, for two reasons. The first was I consider myself to be a slow runner and didn’t want to slow them down, but the second reason was less about my fitness and self-esteem, instead it touched on a far deeper desire, the need to go it alone. 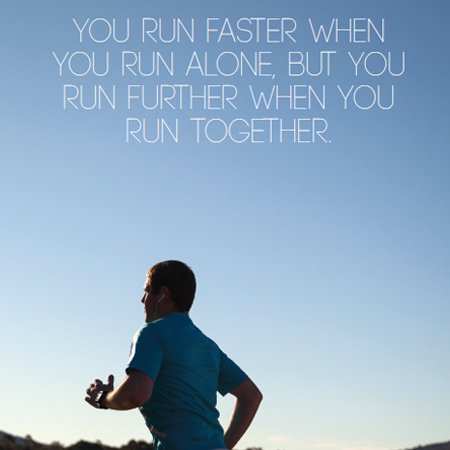 So alone I went (at 5.00am) out into a steep descending path amongst beautiful gums and ferns that eventually brought me to a marked out trail with pink cord every 15 metres indicating the next point of the track. My presumption was that this track would lead back in a loop to the conference accommodation and it proved to be right as the track swung around through a rain forest gully that I knew to be below the retreat venue. I was having a ball, clambering between rocks, crossing the creek, dipping between vines and breathing in the fresh air, loving life and feeling confident I would have plenty of time to get back for some bacon and eggs! Then the track stopped, there was no more pink ribbon to be found. Dead end!

Ok, I thought to myself, I’ll just turn around and head back the same way I came, easy. Well it was easy, until the same thing happened going back and I couldn’t locate the pink ribbon track that had initially brought me into the deep gully. All of a sudden I felt that feeling rising in my stomach, something mixed between frustration, confusion, panic and dread. Had I been with someone else, I’d probably have made a joke to ease the tension, but I was alone and my brain began to go into overdrive. My first thought turned to the embarrassment of potentially turning up very late to our first session of the day, presuming I got back at all. My next thought was ending up on the news that evening, headline reading,

I didn’t want to be that guy, but I was, I knew it and I became angry. Then came the “what if.” What if I tripped over now and broke my ankle, what if I get so exhausted I can’t keep going, what if the SES is sent out to look for me, all good questions that I should’ve asked myself before heading out.

The run that had begun as a 45 minute stroll ended up as a 2.5 hour trek, with me following the creek all the way back to an overhead train line and finally back to the venue via a massive dog leg. I can’t begin to tell you how overjoyed I was to see the faces of the kitchen staff in the now empty dining hall.

So what did I learn? It’s true that it takes bravery to go it alone, to set out on your own adventure, but it also takes as much (if not more) guts to work with a team, to potentially be the one who slows everyone down, to place yourself in a vulnerable position amongst your peers. I still like to run alone, there is something excellent about running first thing in the morning. It’s almost meditative to run the same track each day, the movement becomes instinctual and I can wander around in my head. But to run alone, on an unfamiliar track, with no safety net or support is simply asking for trouble. I’ve also learnt to apply this same methodology to the way I approach my work and ministry.

My old thinking was that it would seem burdensome to share my new ideas, talk through plans and ask others for their input. I’d just be better off pioneering on my own. It just seemed to be more efficient. Who hasn’t been to a meeting and felt like it was a complete waste of time? Yet the longer I’ve spent working alongside, and leading others, the more I’ve realised that it’s not just about me, my time, what I need to get done.

It’s about us going together.

This can be a tough concept for a teacher who spends the majority of their time separated from their colleagues in the classroom with students. I still have a lot to learn about team teaching, spending time in my colleague’s classrooms and working collaboratively, even online through Google classrooms. Certainly, the further I travel in my teaching and ministry the more I realise I’m not here to run a 100 metre race. I’m here for the marathon, and to make it across that finish line I need the support of other runners.

Nathan Ahearne is a teacher and Director of Faith Formation at Marist College, Canberra. He is married with four young children. Apart from his wife and children, Nathan’s other passions include youth ministry, running, cycling, kayaking and outdoor photography.