I have a confession to make: I have never watched an episode of Game of Thrones! To be honest, what really turns me off is how disparate the content and values are from those I hold – in fact, just about every time I’ve walked into the room when someone is watching it, I’ve been confronted with either nudity, a sex scene, or someone being killed.

I remember a conversation with a dad-of-many called Dan, of a similar vintage to me, who I met at last year’s Light To The Nations. His grown-up children flatted together in Melbourne and he visited overnight. When they were searching out a movie to watch that evening, he discovered a Game of Thrones DVD in the player and suggested they put it on, as he hadn’t seen it before. He said that as the episode progressed, his kids sank further into their armchairs and eventually one son suggested they turn it off, adding to his Dad, “I don’t think it’s appropriate for someone your age to watch!” 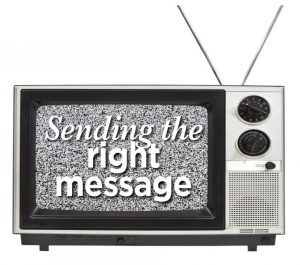 As parents, we set the bar about what is, and isn’t, appropriate, even for our adult children. I often found myself asking my teen kids when they brought home a new DVD, “Is it appropriate?” I worry less now because they usually have it covered. Even the most regular boyfriend recognises what standard is okay in our home and what isn’t. Occasionally they’ll add, “Well, there is a love scene but we can fast forward it,” or “It’s supposed to be a bit violent but the message is good.” We need to send clear messages about our values. Telling kids not to have sex before they’re married but watching TV episodes and movies that clearly contradict the values we’re communicating tells our children that it’s fine for them to be hypocritical, too.

Don’t get me wrong – I think it’s really important to watch a variety of movies with our kids, to discuss complex issues which arise in a calm and open way, and to use the opportunity to quietly reinforce what our values are. Life is not perfect, and none of us humans are. Our kids will occasionally make poor choices. However, hopefully they can make their own more considered choices rather than assuming that if the world is sending a message that something is okay, it must be.

Alternately, we can source some movies which promote positive Christian values. My teen students, even the non-Christians, love the chaste love story in A Walk To Remember, and my children were inspired by Fireproof. The Lord of the Rings and the Harry Potter series are consistent with our Christian values of compassion and forgiveness.

The Bible itself is actually full of highly colourful, even risqué, stories; so we don’t need to look far for tales with both complexity or a sound moral. However, as the famous protestant preacher Billy Graham said, “We are the Bibles the world is reading; We are the creeds the world is needing; We are the sermons the world is heeding.” What is the moral that our personal story is sending our children?