A new approach to safeguarding

The newly formed Institute for Professional Standards and Safeguarding hopes to be a national leader in its field, as Matthew Biddle explains…

THE Archdiocese of Canberra and Goulburn is taking a “revolutionary” approach to the way it manages the safety and well-being of children and vulnerable people, according to manager of the newly-formed Institute for Professional Standards and Safeguarding (IPSS) Jane Cronan.

The IPSS commenced its work in October 2015, and aims to ensure that the Archdiocese delivers a consistent, comprehensive and proactive approach to safeguarding across all its parishes and agencies.

Previously, individual agencies and organisations within the Archdiocese have managed their own safeguarding policies and procedures. Similar arrangements are in place in most other Australian dioceses.

“What Archbishop Christopher wants now is an Archdiocesan response to child protection and safeguarding, which is fairly revolutionary in Australia,” Mrs Cronan said. “This is an incredibly courageous decision.

“We’re hoping to lead Australia in these responses across all dioceses, because I think eventually every diocese is going to need something like this Institute.

“What we’re trying to do is bring consistency. We want to make sure that the policies, investigations and responses look similar in form, no matter what corner of the Archdiocese you’re in.”

Mr Casey said the Institute would handle everything related to child protection and safeguarding in the Archdiocese, including policy, training and formation, healing of victims, compliance, and investigations.

“We’re the people who will respond when somebody might bring a complaint, be it historical or current, about somebody associated with the Church,” he said. 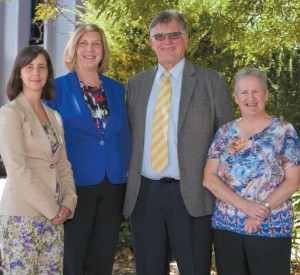 “We will also be developing training and formation for every part of the Archdiocese, including the Archbishop’s Office for Evangelisation, all the parishes, Catholic Education, CatholicCare, and Marymead.”

The pair have extensive backgrounds working in the area of child protection. Mr Casey, who was a NSW detective for many years, first investigated a case of child abuse more than 40 years ago.

Mrs Cronan’s background is in law and education, having worked as an assistant Attornery-General and prosecutor for child sexual abuse in the USA and later as a teacher in the Archdiocese.

Despite the challenges involved in working in child protection, both Mr Casey and Mrs Cronan agree that the work is also highly rewarding.

“Working with the victims is both the hardest and the best thing,” Mr Casey said.

“You’ve got to look at some stuff that challenges you, and you have to keep your faith strong because you see some things that are absolutely heart-rendering.

“But I thank God for the opportunity for us to do this work. Being able to go out and do what you can to help someone is priceless.”

For Mrs Cronan, it’s the response from the victims that keeps her motivated each day.

“The hardest thing is the shame that you feel when you meet a victim and the harm that’s been caused, especially if it’s at the hands of the Church,” she said.

“But the best thing about this job is the offering of support and healing – listening to them, finding out what they need, and how we can respond to them.”

One of the major goals of the IPSS is to provide a safeguarding environment, by developing an “awareness of our theological mandate to respond to vulnerable people and keep them safe”, Mrs Cronan said.

“Hopefully by building and educating about a safeguarding environment, people will know what to look for… and that is what we want,” she said.

“That’s how the ordinary person helps in safeguarding, they take the responsibility they have for their own children and move that on to all children in the parish. If they see something that doesn’t seem right, they talk about it and they bring it to attention. They have as much light as we do to shine in the dark corners.”

As part of the formation process, the IPSS will visit parishes and schools in the near future to speak about the components of a safeguarding environment, because, as Mr Casey points out, protection of vulnerable people is everyone’s responsibility.

“It’s not sufficient for people within the Church to stand back and say it’s all these dreadful priests and bishops’ fault,” he said.

While he acknowledges there will always be a need for improvement, Mr Casey said attitudes towards child protection have come a long way since his first case in the 1970s.

“When I first started, judges had to give a warning to juries that sexual assault complainants and children were unreliable witnesses,” he explained. “I can still remember even in the late ‘80s, talking to colleagues in the police force… people arguing that child abuse was not real crime. Even in those days there was no recognition of the long-term harm and damage that is done by sexual abuse.

“But when you’re dealing with paedophiles, they’re not going to change, they can’t change, so your response has to be far more decisive and long-term. We’ve now developed a fairly comprehensive understanding about it, but that simply wasn’t the case many years ago when I first started.

“Now people are far more conscious and the attitudes towards sexual abuse and the culture that is building around it is far more protective of children and vulnerable people.”

Although he believes the Royal Commission into Institutional Responses to Child Sexual Abuse has been “painful”, Mr Casey said future generations would view it retrospectively as a defining moment in the history of Australian Catholicism.

“As a Church we’re going to be able to look back on this and say it has been a wonderful opportunity,” he said. “The Royal Commission has really been, and will prove to be, an absolute gift because it’s focused us as a Church, as a faith community across the country, on dark corners that perhaps we didn’t want to look at.”