ARCHBISHOP Christopher Prowse urged Australian politicians to practice charity and honesty in their work, as Federal Parliament recommenced on February 2.

Speaking at an ecumenical service at Wesley Uniting Church in Forrest to mark the beginning of the parliamentary year, the Archbishop reminded those present, including Prime Minister Malcolm Turnbull and Opposition Leader Bill Shorten, of the “golden rule”.

“In everything, do to others as you would have them do to you,” the Archbishop said, quoting the Gospel for the day, from Matthew, chapter seven.

“In one form or another it is found in every major religion on the earth. It is a kind of universal ethic that people of any religion, or perhaps even no religion at all, might well agree upon. 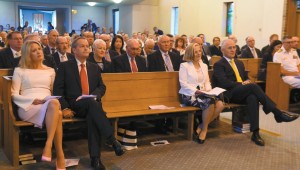 “In a world of galloping diversity, to find the gold nugget of a universal solidarity ethic, is indeed, a ‘Eureka’ moment.

“This ‘golden rule’ is… a universal ethic we all must commit to.”

One of the main challenges facing Australia’s parliamentarians today, the Archbishop said, is determining how long-held religious and ethical anchorages can be lived out in an increasingly secular society.

“In a most particular way, our parliamentarians must carry special burdens of responsibilities,” he said. “Hence our gathering now to pray for them, humbly and with respectful encouragement.