SHAWN van der Linden and Shane Dwyer, two of the Archdiocese’s most senior pastoral services staff, were farewelled last month after many years of service.

Mr van der Linden served as the director of CatholicLIFE for the past nine years, while Mr Dwyer had been the senior coordinator for faith formation and spirituality since 2011.

Mr van der Linden’s final day working for the Archdiocese was August 28, and he was officially farewelled at a cocktail reception on October 14, attended by about 150 colleagues, friends and family.

The inaugural Archdiocesan director of pastoral support, Mr van der Linden established and led a growing team of staff that has been based at the Rheinberger Centre in Yarralumla.

He said he loved serving the Archdiocese and found his role highly rewarding.

“I could never have anticipated the challenges that would come in this job, but also just how much grace I would experience over the time,” he said.

“One of my fondest memories over these times has been the capacity we’ve had to have genuine teamwork, where there’s an experience of trust, healthy conflict, commitment, accountability and a dedication to results.

“It was a valuable experience and something I’m really proud to have been a part of.” 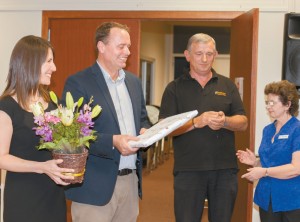 Colleague Matt Casey, the Archdiocesan professional standards officer, said it had been “a great pleasure” to have Mr van der Linden as a friend and to work closely with him over many years.

Director of Catholic Education Moira Nadjecki and Archbishop Christopher Prowse also thanked Mr van der Linden for his service to the Archdiocese and its people for almost a decade.

Earlier in the month (October 1) friends and colleagues gathered to farewell Mr Dwyer, who commenced a new role as assistant director (formation) with the Lasallian Mission in Sydney on October 12.

Mr Dwyer said he had been overwhelmed by the gratitude and support he had received from Catholics in the Archdiocese during his time in the role.

“One of the joys of my work is that I get to interact with people more or less on a daily basis through the writing and through the seminars and conferences,” he said. “It’s been one of the wonderful privileges for me.

“The hardest part will be leaving behind the great people I have been working for and with in this Archdiocese. I will miss being here very much.”

Mr Dwyer has authored numerous faith resources in the past four years, including the books I Believe and People of the Eucharist, as well as the daily Lenten resource, Into the Desert, and a daily Advent resource that will be available later this month.

“Shane has an amazing ability to make the most complex theological concepts sound understandable,” she said. “But even greater is his capacity to push the theological concept to the side and to reach down and to touch the spirit.”

Corpus Christi parish priest Fr Warrick Tonkin has been appointed to lead faith formation in a temporary, part-time capacity for the next seven months.