The Australian Church in 2030: What the research predicts 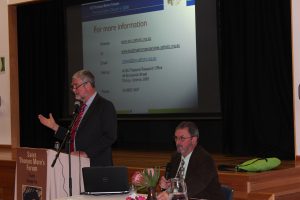 FORECASTING what the Catholic Church in Australia will look like in 2030 is no easy task, but demographer and sociologist Robert Dixon has given it a good try.

Dr Dixon has just retired as foundation director of the Pastoral Research Office of the Australian Catholic Bishops Conference, a position he held for 21 years since 1996.

Speaking recently to about 100 people at the St Thomas More Forum, he flagged that by the year 2030, Mass attendance will be down to 5 per cent from 12 per cent which it was in 2011.

He said the Church would continue to grow albeit at a much slower rate and that the ethnic mix would change with a lower percentage of Catholics identifying with their baptised faith.

According to his research, Mr Dixon forecasted that the number of priests in training will plateau with clergy to eventually be made up mainly of overseas-born priests or those with recent overseas heritage.

He anticipated there would be changes to the way parishes were structured and managed.

He suggested that religious brothers were in danger of becoming extinct and that there would be much fewer religious sisters.

He said Catholics made up about one-quarter of the Australian population and accounted for more than 40 per cent of regular church attendees.

Catholic schools educate more than one-fifth of all Australia’s primary and secondary school-age students, and Catholic organisations, in aggregate, employ more people than any other non-government organisation.

Dr Dixon is eagerly awaiting the 2016 Census figures which should be released on June 26, as well as the 2016 National Church Life Survey data.

He believes that the upcoming Plenary Council in 2020 will be a decisive moment in the life of the Catholic Church in Australia.

Although he is “retired”, Dr Dixon is keen to keep speaking about his findings from years of research, so that parishes can be well prepared for the challenges leading up to 2030.

He emphasised the importance of being a “listening Church” and highly recommended a book called Building Stronger Parishes, written by his former Pastoral Research Office colleague Dr Trudy Dantis, who is now based in India.

He said those seeking further research and resources should visit the Pastoral Research Office at pro.catholic.org.au

Those wanting to watch or listen to Dr Dixon’s talk at the St Thomas More Forum can do so by going to www.stthomasmore.org.au and clicking on the video link.

At the end of the forum, a presentation was made to Sharon Brewer for the years of effort she has put into helping the forum in a variety of roles.

The next St Thomas More Forum meet is on June 16 at the Mercure Hotel. It will feature the parish dinner and a talk by Greg Sheridan, foreign editor at The Australian Newspaper. He will give a talk titled an Christendom Thrive, Can it Survive?

Inquiries can be made by calling 0450 829 696 or by emailing forum@stthomasmore.org.au