‘Big moments’ the key for Ben 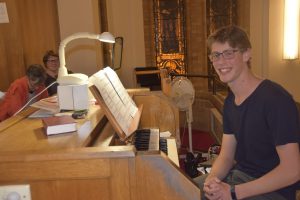 BEN Chesworth doesn’t mind admitting he enjoys the performance spotlight. That’s part of the reason he chose to take up the organ as a year 8 student at Canberra Grammar School five years ago.

“I was a young teenager and this is a loud, fun instrument. You can be the centre of attention – entertain your mates,” he says.

And “ripping out the old Toccata and Fugue in D Minor”, with Bach’s famously spooky intro, is a particularly fun party trick.

But, regardless of the tune, it doesn’t get much better for this young musician than making St Christopher’s Cathedral ring with the sound of its 1100-pipe organ.

Ben is the regular organist at the cathedral, having completed the first St Christopher’s Cathedral Organ Scholarship last year.

St Christopher’s Music Director Jaki Kane says the scholarship was established in response to a need in the Archdiocese for more trained organists, particularly young people.

“Learning to play for the liturgy is the primary purpose of the scholarship,” she says.

“There is no formal way to learn that and it is mostly done through mentorship. In this case, the scholar learns ‘on the job’, with the guidance of the Music Director.”

The head teacher at the ACT Organ School, Philip Swanton, recommended Ben for the scholarship, having seen him develop his skills since year 8, when Ben saw the organ as a good fit with his involvement in motet and chamber choir singing.

Ben says it took him about 18 months to get the hang of the multiple keyboards (or “manuals”) and pedals, and to adapt to reading up to three lines of music at a time. Anyone who’s heard him play at the cathedral will know he has mastered it.

He doesn’t have any clear favourites in the hymn stakes, saying “I just like playing along with the congregation”. But Praise, My Soul, the King of Heaven and Jerusalem never fail to stir him.

“I like building up to a big finish and belting it out, especially at Christmas when it’s really loud and the timpanists and trumpeters get going. I love those big moments,” he says.

Ben is in his first year of studying political science and arts, as well as environmental studies, at ANU and says music is likely to play a major role in his life, regardless of the career he chooses.

He might even do a bit more singing. “If I can make a contribution to the choir [at the cathedral], I would love to get more involved in that,” he says.

The St Christopher’s Cathedral Organ Scholarship provides financial assistance for tuition and the chance to play at Mass and other events with the choir at the cathedral. Interested applicants for the scholarship are invited to email the cathedral via Cathedral@cg.org.au for further information.