Vatican City (CNA/EWTN News): The theme for the 2018 Synod of Bishops will focus on how to best teach the faith to young people and help them to discern God’s will for their lives.

Set to take place in October 2018, the 50th General Assembly of the Synod of Bishops will discuss “Young People, the Faith and the Discernment of Vocation,” a Vatican communique said.
The theme is in continuity with topics that emerged from the 2014-2015 Synod on the Family, as well as with the contents of Pope Francis’ Post-Synodal Apostolic Exhortation “Amoris Laetitia,” which was written largely on the basis of the synod’s concluding document. 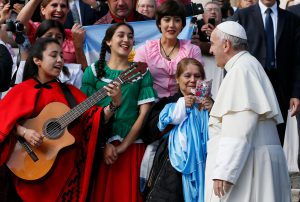 According to the communique, the theme “aims to accompany young people on their way of life towards maturity so that, through a process of discernment, they can discover their life’s plan and realize it with joy”.

By doing so, youth will not only be able to open themselves to an encounter with God and with others, but they will be able to actively participate “in the building up of the Church and society”.

The last Synod of Bishops was dedicated to the family and took place in two parts, the first an Extraordinary Synod in 2014, which was followed by the Ordinary Synod in 2015 that drew 279 cardinals, bishops and representatives from all over the world to discuss the challenges and blessings of family life.

The Council for the General Secretariat of the Synod of Bishops is charged with preparing for the Ordinary Synod, which takes place every three years to discuss a specific theme of importance in the Church.

Greg Burke, Director of the Holy See Press Office, told journalists that the topic of the upcoming synod was not about celibacy or the priesthood in particular, but was “wider than vocations.”

Vocations “certainly will be part of that but it’s wider, much wider”. In addition to vocational discernment, it’s about “the formation and transmission of faith,” he said. Asked to explain “discernment,” Burke described it as “spiritual decision making,” not only about whether or not to become a priest, but about “what you do in life.”