“THE sowing of the seed of faith may seem like a small thing, but when it flourishes it’s a magnificent thing which builds the kingdom of God,” Fr Tony Percy told catechists of the Northern Deanery on November 18.

The Vicar General was preaching during the first of five special Masses to be celebrated before the end of the year in thanksgiving for the work of voluntary catechists in the Archdiocese.

Fr Tony spoke about the importance of the ministry and its immense value to the Church, explaining how results may not always be visible but are often occurring through the grace of God. 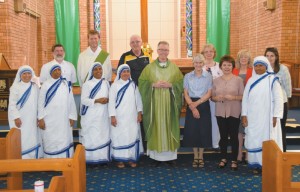 Catechists from the Northern Deanery were thanked for their ministry at a special Mass at St Raphael’s Church in Queanbeyan on November 18. PHOTO: MATTHEW BIDDLE

Miriam Bugeja was presented with the Fr Michael O’Brien award for 35 years of service as a catechist; Pauline Verrell received the Archbishop’s medal for 20 years of service, and Michelle Bennett and Valerie Brooker were recognised for 10 years of ministry.

Deacon Matt said he was grateful for the work of the Archdiocese’s 200 catechists in 2015.

“This year across the Archdiocese we’ve educated around 2,000 baptised Catholic kids in State schools,” he said.

While the catechist ministry will continue in its present form in 2016, there are also plans to develop an additional program.

“We are hoping to develop a student catechist program across the Archdiocese, where trained Year 10 and 11 students teach Catholic primary school students who attend State schools,” Deacon Matt explained.

The second Mass to celebrate catechists was held on November 20 at Young, while other Masses will be held at Pearce (December 1), Merimbula (December 9), and Jindabyne (December 10).