CatholicCare there for all 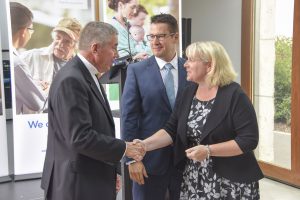 A NEW strategic plan might have brought about a change of logo, slogan, vision and mission statement, but CatholicCare will continue to serve the community in the same way it has known for the past 60 years.

The new slogan “there for any human” is a continuation of the organisation’s past service as a welfare arm of the Archdiocese accepting people from all walks of life.

Respect, stewardship, solidarity and excellence are the core values.

Archdiocesan CatholicCare Chief Executive Officer Anne Kirwan was one of the main drivers behind the new strategic plan for 2017 and 2018.

She spoke about a new optimism and said the recent launch and re-branding enabled the organisation to prioritise what it stood for and to give it a fresh look, while embracing the challenges of a changing society.

In her address, she promoted the goals, direction and future sustainability of the organisation, highlighting a need for being a provider of choice, being able to empower people while helping develop healthy and inclusive communities through collaboration for the common good.

Archbishop Christopher Prowse reaffirmed his support at the launch emphasising the wide expanses of the Archdiocese which pushes as far as Lake Cargelligo in the west, Goulburn and Crookwell in the north and Eden in the south.

“Christianity going out to the periphery is not new,” he said.

“The Catholic Church working with those on the fringes has been happening for more than 2000 years.

“I commend this new strategic plan for CatholicCare and this awareness-raising program today to let everybody know that we are here to serve the needy at all times.”

He acknowledged the leadership of Ms Kirwan, thanking her for providing enthusiasm and expertise in difficult times.

“I commend Anne and her 270 staff for the many acts of kindness that they offer to the needy,” he said.

“Every year about 10,000 people are helped very practically by the CatholicCare of the Archdiocese.”

Peter Gordon was master of ceremonies.

Indigenous elder Warren Daley opened proceedings by giving a welcome to country on behalf of the Ngunnawal people as traditional custodians of the land.