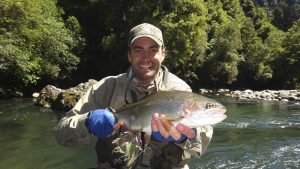 A former student at Holy Trinity Primary Curtin and Marist College, he is well acquainted with the fish as a Christian symbol and the Gospel passages it depicts.

During the week, he is kept busy running his business advisory firm in Canberra, but it’s on weekends that he looks forward to fishing the local streams, in particular the Goodradigbee River in the Brindabella Mountains.

The Brindabellas dominate the horizon west of Canberra.

Hidden behind them is the beautiful Brindabella Valley, with its rich indigenous, pioneering and pastoral history.

Many Canberrans escape to the valley and the surrounding mountain trails on weekends to four wheel drive, camp, hike, as well as fish the waters of the Goodradigbee River.

“The Goodradigbee River has had a long association with fly-fishing,” he said.

“It has put me on a learning curve that I continue to explore and I look forward to the start of every season, keen to crash and crawl through tea tree and tussock to make it to the water’s edge.

“The bush-reclaimed trails, deep gullies and nearly impenetrable scrub can make for interesting times in waders and rod in hand, as does the odd streamside snake you come across on most trips.”

He says there is something special about the place.

“George Patterson, John Hedge, Douglas Stewart and Hudson Fysh celebrated the river and Brindabella Valley in prose and poetry, and ABC and Channel 9 journalist Richard Carleton owned a property in the valley,” he said.

“Many authors and other notable visitors and residents have been connected with it.

“Miles Franklin grew up there and Gwen Meredith, from ABC’s epic radio serial Blue Hills, once owned a log cabin at Koorabri, and former Prime Minister Malcolm Fraser was a regular fly fishing guest on the same property.”

Mr Vincent and his family have always loved the high country.

It’s no surprise then, to learn that his parents, John and Anna Vincent, formerly of Canberra, moved down the Monaro and have been long-time parishioners of Bombala Parish.

As a man who thoroughly enjoys the bush, David likes to visit his favourite haunts any chance he can get.

He particularly looks forward to taking his young children on day trips, introducing them to fishing and allowing them to know and love the Australian bush.

“It’s a healthy past-time and is a good way to bond with your kids,” he said.

He loves everything about fly-fishing in the Goodradigbee.

This includes the drives to and from the location, as well as being able to be out in nature, as it is never dull.

“Whether we catch a fish or not, it is all about the adventure,” he said.

A self-proclaimed tragic of the sport, Mr Vincent takes his hobby seriously.

He also reflects on the wonderful and delicate happiness one feels from the silence and solitude of the Australian bush.

“As Don Watson writes, ‘sometimes the city is more of a wilderness than the country.’”

Mr Vincent has an array of tackle accessories which he says deliver for him more often than not.

He uses a 3-weight rod and line for smaller streams, which provides a fair sporting contest for fish and fisherman.

The Red Tag, the Royal Coachman, Elk Hair Caddis, Dunny Brush, Hare and Copper and the Black/Brown nymph (bead head optional) and any grass hopper imitation have all been employed with success.

“Big nod to the Wee Creek Hopper,” he said.

And while the odd brown trout is to be found on occasions, it is rainbow trout which he says are great eating and occupy the most real estate in the river.

Mr Vincent acknowledges the benefits of practising catch and release to ensure sustainability of these river gems.

He says what he loves most about the sport is “the endless options to learn and develop”.

“When I first took up the sport I often enjoyed fishing on my own because my mistakes were not noticed and my frustrations not shared.

“It’s not a bad strategy at times, but fishing with others, apart from safety, provides fresh challenges and opportunities that can only help build confidence and knowledge.

“In simple terms, I like catching trout and enjoy the confluence of nature and fishing, hence my attraction to exploring rivers, trekking through the bush and always looking up ahead at that next bend.”