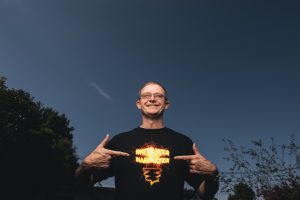 Daramalan Science teacher Colin Price who was a finalist in the teachers BHP Science and Engineering Awards. Picture: Rohan Thomson.

IN the past three years, Daramalan College has produced eight of the finalists in the most prestigious student science competition in the country.

Teenagers from across Australia enter the BHP Billiton Science and Engineering Awards, with three winners chosen from 26 finalists this year.

The awards are a notch on the belt of gifted students at Daramalan. While working on the high-level projects for the awards, the main aim for the students is to reach the silver or gold level in CSIRO’s Crest program, a non-competitive awards system supporting students to design and carry out their own open-ended investigations or technology project.

The science students at the college are being afforded a rare opportunity to collaborate with university mentors in high-level, open-ended investigations, an initiative instigated by their teacher, Colin Price.

Mr Price said if gifted students were restricted to the normal curriculum, they were usually not fully engaged.

“It is vital for students who are inclined towards the STEM subjects to be extended as possible, and with as much control over what sort of projects they do in terms of their picking their own topics, designing their own projects, and just seeing where it takes them,” Mr Price said.

Mr Price was also a finalist in the teachers category of the awards. It’s the second year he’s been nominated to represent the ACT.

His students – Rose Weller, Emma Johnson and Gabrielle Jarvis – each worked on their projects in class and at home, with most of the work happening outside of school hours, Mr Price said.

He said the completed projects were impressive, and getting to the end product was “really, really hard work”.

The students were partnered with a university mentor in an initiative introduced in 2014.

“It started off with me being introduced with Professor John Evans,” Mr Price said.

“We now have a network of about 15 ANU scientists more than willing to mentor year 9 and year 10 science investigations.”

This year, the three nominees had a mentor each, two from ANU and one from UC.

Year 11 student Rose Weller found a way to detect previously undetectable steroids in athletes. Gabrielle Jarvis, also in year 11, investigated whether mine waste pollution had an impact on macroinvertibrate fauna in the Molonglo River. Year 10 student Emma Johnson found out how much carbon was sequestered by five-year-old red ironbark trees at the National Arboretum.

All three of the students nominated as finalists and hailing from Daramalan were female. Out of the overall winners announced on Tuesday, two of three were female. In the same week, the UN recognised International Day of Women and Girls in Science. The UN Secretary-General Antonio Guterres said the international day, held on Saturday, was to encourage an end to the bias of women in STEM subjects.

Mr Price said over the years, the number of female students and male students nominated as finalists in the awards have evened out.

Mr Price said he was chuffed to receive the nomination as a finalist.

“You’ve got to show your passion to help develop their passion and their interest,” he said.