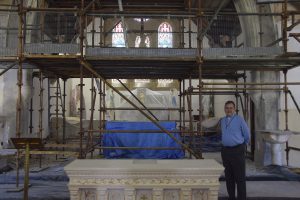 MORUYA parishioners are now worshipping in their spiritual home, minus scaffolding, dust and noise, after a decade of restoration.

Fr Armstrong signed off from the parish recently to take up an appointment as spiritual director at Good Shepherd Seminary in Homebush.

He has been replaced by Fr Martins Aloga, who was an assistant priest at St Christopher’s Cathedral.

Fr Armstrong said the work was made possible through bequests to the parish from generous benefactors.

Much of the credit also went to parishioner Damian Rogers.

“Damien was instrumental in looking at new ways to restore the paintwork of the church which would ensure that it absorbed the moisture and was likely to last over a longer period,” Fr Armstrong said.

“He has invested much of his time and passion to ensure this project was able to be completed.”

J and D Murnane were contracted to replace the terracotta tile roof with heather blue slate from Wales under the guidance of Joe O’Connor. This work also ensured that the roof was able to breathe and remove excess moisture.

Local sign writer Tony Sands was hired to complete the restoration of the original words over the sanctuary, ‘Gloria in Exclesis Deo’ (Glory to God in the Highest).

The community would gather later in the year to celebrate the completed works and to give thanks for the hard work which has gone into the building, Fr Armstrong said.

“The finance committee and the parish pastoral council have been appreciative of all those who have helped to make this place of prayer a place of beauty which will stand the test of time,” he said.

The laying of the foundation stone and the building of Sacred Heart Church took place in 1887.

It boasts the same local granite stone which was used in construction of the Sydney Harbour Bridge.