THE nuns of Mother Angelica’s monastery have thanked those who have prayed for the EWTN founder and have asked continued prayers for the 92-year-old nun.

“Mother’s condition remains delicate and she receives devoted care day and night by her sisters and nurses,” the nuns of Our Lady of the Angels Monastery said in an update on February 22.

“Although she is most often sleeping, from time to time Mother will give a radiant smile. There is no doubt that her heart must be on things above.” 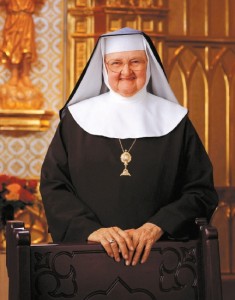 She headed the organisation until 2000 and became one of the most influential Catholic women in the USA.

Mother Angelica suffered a stroke in 2001, but continues to live at Our Lady of the Angels Monastery in Hanceville, Alabama. It was reported last November that Mother Angelica had been placed on a feeding tube.

“We want to extend a very special and heart-felt thank you to each of you who have been praying for Mother Angelica,” the nuns said.

“Mother herself is regularly fortified by the Sacraments. Please continue to keep her in your prayers. Each day is a gift.”

Mother Angelica was able to pass through one of the special Holy Doors designated for the Catholic Church’s Year of Mercy, according to the update.

Pope Francis recently sent greetings to Mother Angelica on February 12 while he was on the plane to Cuba.

Towards the end of last year, all the friars of the Franciscan Missionaries of the Eternal Word came to the monastery for the offering of a special Mass for Mother Angelica.