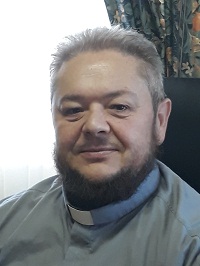 WHEN Archbishop Christopher Prowse put out a plea for priests to fill a gap in the rural part of the Archdiocese, Fr Pasquale Pizzoferro answered the call.

Showing great enthusiasm already, the Italian born-and-raised priest says he is delighted to now find himself in Temora as its new administrator.

“I became concerned for the appeal of Archbishop Prowse requesting that priests make themselves available for rural parishes that do not have pastors,” he said.

On loan from the Archdiocese of Sydney, he has been in the mission parish since January 3.

He is a relative latecomer to the priesthood, but speaks of vocational fulfilment in the priesthood after earlier spending 12 years working for a public transport company in Italy.

“In retrospect I realise that my decision to embark on social work and my career had been something of a delaying approach,” he said.

“It was a way of doing something productive with my life without actually committing myself fully to what my life was made for.

“I did continue with my job and my social activities, but my heart was not made for these things.

“I was happy, but not completely fulfilled.”

To help with discernment, Fr Pizzoferro spent 2001 applying himself at the Neo-Catechumenal vocational centre in Naples.

It became apparent for him during this time that he should become a priest.

In January 2003, he entered the Redemptorist Mater Seminary at Pagewood, and found his formation years to be full of trial and tribulation.

“I was a stranger to myself in many respects,” he said.

“So, indeed I came to know myself well.

“Prior to this, I was ignorant of God and of the Church, but eventually I came to know God as Father.”

He was ordained by Cardinal George Pell at St Mary’s Cathedral in 2012 and has since ministered to a number of Sydney parishes in addition to being a member of the CRS Board Committee.

He has served as a chaplain to the Courage International group, which journeys with those who have same-sex attraction.

Fr Pizzoferro says that with his assistant, Fr Trenton van Reesch, there is already great harmony, so he is easily settling into the Temora Mission and the community.

“Temora is a nice town and I am loving the regular sunny days, Fr Pizzoferro said.

“So far I have found the people to be very kind and courteous.”