How green is your church… and what are the savings? 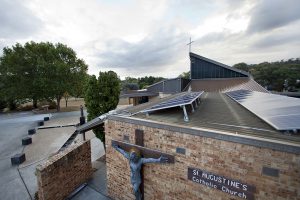 John Giacon is a Christian Brother who has been involved in promoting green action in his house and at ANU where he is an honorary lecturer, teaching Gamilaraay language. Here he explains how and why.

“LAUDATO SI’, mi’ Signore” – “Praise be to you, my Lord”. In the words of this beautiful canticle, Saint Francis of Assisi reminds us that our common home is like a sister with whom we share our life and a beautiful mother who opens her arms to embrace us. … This sister now cries out to us because of the harm we have inflicted on her by our irresponsible use and abuse of the goods with which God has endowed her. We have come to see ourselves as her lords and masters, entitled to plunder her at will. The violence present in our hearts, wounded by sin, is also reflected in the symptoms of sickness evident in the soil, in the water, in the air and in all forms of life.

The need to care for our sister and mother is clear and urgent, at least to some. Individuals and organisations such as parishes can do a lot themselves, and can influence parishioners, corporations and governments to act.

If the Church does not respond to the needs of people and the earth, does not match the message of Jesus with current realities, people will see it as irrelevant, and it will be so. Vatican 2’s Gaudium et Spes begins:
The joys and the hopes, the griefs and the anxieties of the men [sic] of this age, especially those who are poor or in any way afflicted, these are the joys and hopes, the griefs and anxieties of the followers of Christ. Indeed, nothing genuinely human fails to raise an echo in their hearts.

The ones who suffer most from climate change are the poor, and I have no doubt that if Gaudium et Spes were written today it would include a reference to the earth similar to Pope Francis’s statement above.

This article looks at some examples of individual and parish action which may provide models or guidelines for others.

The main focus here is on CO2 reduction, reducing climate change. Some other areas for earth-friendly action are water use, recycling and promoting biodiversity.

How much does it cost to go green?

At the Christian Brothers’ house in Canberra, when our hot water system failed we installed solar, with gas boost. It has paid for itself in around three years. Installing insulation and closing gaps in walls and around doors and windows have also been very effective in keeping the house warmer in winter and in reducing costs.

I have installed two sets of solar panels. In Canberra solar electricity was installed six years ago at a cost of $20,000. Earnings to date are over $16,000, and will continue at $2500/year for a further 14 years. And 32 tons less CO2 has been put into the atmosphere. At my mother’s house in Wollongong the 4.5 kW system recently paid back all the $20,000 cost. It will continue to provide free electricity for many years.

At the Australian National University, LED lights and sensors have been installed in areas where previously lights were on 24/7. The payback time is under two years – a return of over 50% on investment.

In all instances there have been investments, but very good returns – much better than money in the bank or the stock exchange.

These days the returns on solar panels are less – you save money by producing your own electricity, and earn very little from the feed-in tariff. But the cost of solar power is dramatically less – around one third of the cost of the two systems discussed above.

An organisation needs a person or group which does the work. Then there are many options for action.

Solar panels have the advantage of making a clear public statement, but they may not be the most effective way of reducing CO2 production and are often not the best investment. Using reverse cycle heating rather than other electric heaters can reduce running costs by up to 75%. The return on investment will depend on how much heating occurs but can be as low as two years. Replacing lights with LEDs is often a very good procedure, particularly for lights that are on much or all of the time, such as Exit signs and security lights.

Other ways of reducing consumption include insulation, closing gaps around doors and windows, holding meeting in smaller rooms, and so on. Some websites with further information are listed at the end of the article.

Behaviour and structures can both have a huge impact on consumption. When both are present you have hit the jackpot.

Behaviours such as: turning lights off, closing windows, setting the heaters to a lower temperature, having meetings in smaller rooms, wearing jumpers.

Structural changes such as: lights or heaters that use less, sensors that switch things on or off, insulation, closing air-gaps.

What moves organisations and individuals to act?

I have found it relatively easy to act where I live, but many organisations – universities, schools and churches are some I have looked at – find it very difficult to move in this area. Perhaps it is the uncertainty, perhaps a false impression that greenness must involve extra cost, or just organisational inertia. In parishes, priests have a wide range of duties, and they and the parish council need to collect good information before they can act.

So what can a parish do?

The articles listed below suggest that having a group to guide action is a very good starting point for changes in parish belief, structure and behaviour.

Resulting changes need not be limited to equipment. They can also include homilies on the earth, and publicising relevant material, such as Laudato Si, Pope Francis’s other statements on climate change, and articles such as one recently in Eureka Street, on coordinated church action in the UK, where 2000 Catholic parishes are switching to renewable energy: https://www.eurekastreet.com.au/article.aspx?aeid=49838#.V-BaU7XOfHk and bigchurchswitch.org.uk

What the parish does may have a flow-on effect. Some parishioners may act in their own homes. Schools tend to be much bigger than churches, and they are ideal locations for the use of solar panels – they have near-constant daytime use of electricity. An ideal arrangement would be for a school and church to share solar panels, but that may not be administratively possible.

The list below contains mainly faith-based resources. There are many others – for instance a number of churches in the ACT are taking advantage of a government program that offers assessment and financial assistance: actsmart.act.gov.au/what-can-i-do/business/business-energy-and-water-program.

The Australian Religious Response to Climate Change (arrcc.org.au) has a range of materials, including climate action kits. arrcc.org.au/steps2sustainability gives practical steps for faith communities to turn concern into action. The Caloundra Parish used one of their kits as part of its action: arrcc.org.au/caloundra_catholic_parish_uses_climate_action_kit. St Peter and Paul, Kiama, and St Denis, Joondanna, have won awards for their actions: fiveleafecoawards.org/churches-involved/.

The Uniting Church has been a leader in this area: unitingearthweb.org.au. fiveleafecoawards.org/awards/basic-certificate/ is a relatively straightforward and helpful introduction.

Church Resources, cg.org.au, has green plans which may be more relevant to larger organisations.