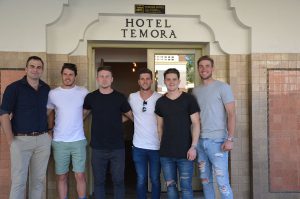 AFTER playing in three consecutive premierships with Hawthorn between 2013 and 2015, former Temora resident Luke Breust could be forgiven for leaving the Riverina town in his wake.

But, the Hawthorn forward hasn’t forgotten his origins.

Along with seven of his friends, he recently bought and revamped the Temora Hotel.

Breust said he was keen “to put something back into the town”, after it supported him in his junior days, as well as now that he is playing in the Australian Football League (AFL).

Buying the pub is not the first time Breust has left an impression on the Temora community since making a name for himself in the AFL.

Despite a demanding schedule, the accurate right-footer has been known to make the occasional visit back to the family farm.

“It is always nice to see the family; they keep me pretty grounded and I enjoy seeing the farm,” he said.

“It’s also good to get out of the hustle and bustle of the city and back to where I grew up.

“Temora will always be home.”

At the invitation of sister-in-law Georgina (nee Rodway) Breust, on some of his journeys home he has visited the local St Anne’s Central School to speak to students.

He has also been known to train with the local Temora Roos football team of which his brother played.

Those closest to the 26 year old know that he is made of the right stuff on and off the ground.

Even after turning himself into one of the most damaging forwards in the game, it has been said that he has remained “very grounded”.

It just so happens that he has even been of use for helping St Anne’s student Patrick Davies finish a school assignment.

Patrick’s mother Katherine (Davies) was complimentary when reflecting on the star footballer and his generosity.

“A few years ago Patrick had to do an assignment on someone in the community who they looked up to and he chose to do it on Luke,” she said.

“It just so happened that when I rang his parents Allan and Denise, he happened to be home on the farm so Allan put him straight on the phone.

“Patrick was then able to ask Luke all the necessary questions for his assignment over a number of phone conversations.”

Breust’s aunt on his mother’s side, Lyne Witenden, says what pleases her most is that her nephew “hasn’t got too far ahead of himself”.

Riding shotgun alongside Breust at Hawthorn in the golden era has been Isaac Smith, a former Temora and Cootamundra resident and ex-student of Mrs Witenden’s at Sacred Heart Central School.

The footballing pair have known each other since primary school days, when they were in just about every representative sporting team.

Mrs Witenden remembers coaching them in representative basketball from under-12s.

She says that they were “always ultra competitive”, but “more importantly kind and considerate people off the court”.

Also in the picture is Smith’s father Wayne (Smith), who was a well-known principal at Cootamundra’s Catholic school.

He moved to Melbourne with wife Christina a few years ago to be closer to Isaac.

Isaac Smith was one of several Hawthorn players on hand late last year, supporting Breust at the re-opening of the Temora Hotel.

Smith, along with Hawks players Taylor Duryea, Ryan Schoenmakers, Tom Mitchell and Liam Shiels, signed autographs on the day of the re-opening, while retired full-back Brian Lake also came up to be part of the occasion.

Apart from buying a hotel in his home-town, Breust is completing a Bachelor of Commerce in Melbourne, which he says keeps him busy and gives him a focus outside of football.

In 2016, the Hawks had another successful season playing finals, but were pipped by eventual premiers Western Bulldogs in their semi-final.

The Hawks have made wholesale changes over the off-season, where it was speculated that Breust might be traded to Gold Coast.

Instead Hawthorn bade farewell to high profiled players Sam Mitchell and Jordan Lewis, who have since found homes at West Coast Eagles and Melbourne respectively.

To fill the void, the Hawks have added highly-rated pair Jaegar O’Meara and Tom Mitchell.

For the Hawks to remain in premiership contention for season 2017 they will again need big output from the likes of Breust and Smith, something the Temora footballer is embracing.

“I’m pretty excited about this season as we have had a number of changes to our playing group,” he said.

“This has created some uncertainty as to how we will go this year but we are excited by the challenge.”

Another Archdiocesan connection with Hawthorn is that Archbishop Christopher Prowse’s father Frank played 20 games as a ruckman for the Hawks between 1949 and 1950.