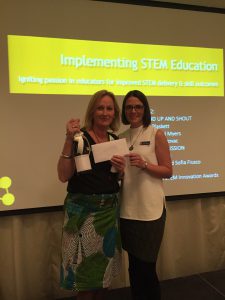 A disconnect between the students and their local environment and turning this into a positive was the impetus behind St Bernard’s Primary School Batemans Bay claiming a win at the 2016 Criterion Conference innovation awards held in Melbourne recently.

Engaging several bodies of the community including the council, Green Army, State Forestry and local business, Ms Burtenshaw and her students designed an automated hydroponic garden which is growing fresh produce.

The innovation came about after it was acknowledged that the project would encourage students to use less plastic in their lunches.

This, in turn, would mean less rubbish finding its way into Short Creek which runs past the school and into Casey’s Beach.

Ms Burtenshaw said the school, which received a $3000 grant from the Independent Education Union and Teachers Mutual Bank, is keen to expand on its garden.

“Initially the hydroponic garden will supply the canteen but we hope to duplicate the system so that we can provide fresh lunches for the whole school.

“Then our big goal is to team up with a Caritas Mission School and then assist them in setting up a hydroponic garden which will help less fortunate children around the world.”

Archdiocesan Director of Catholic Education, Moira Najdecki, congratulated the staff and students who were amongst the national finalists to be selected.

“There are many innovative champions in our Catholic schools who foster great ideas to implement in schools,” she said.